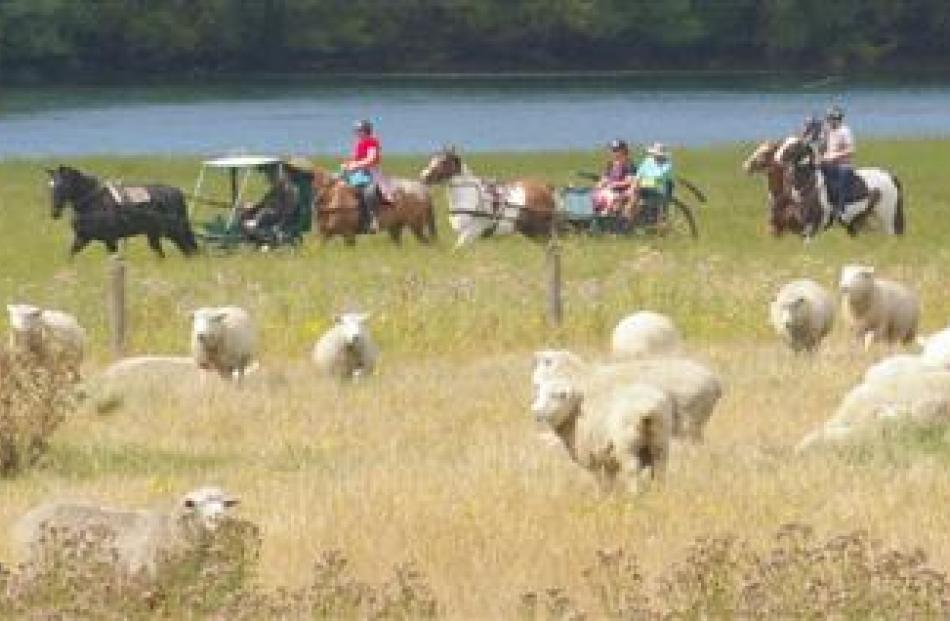 The Tussock Creek light wagon trail winds beside the Clutha River near Clydevale. 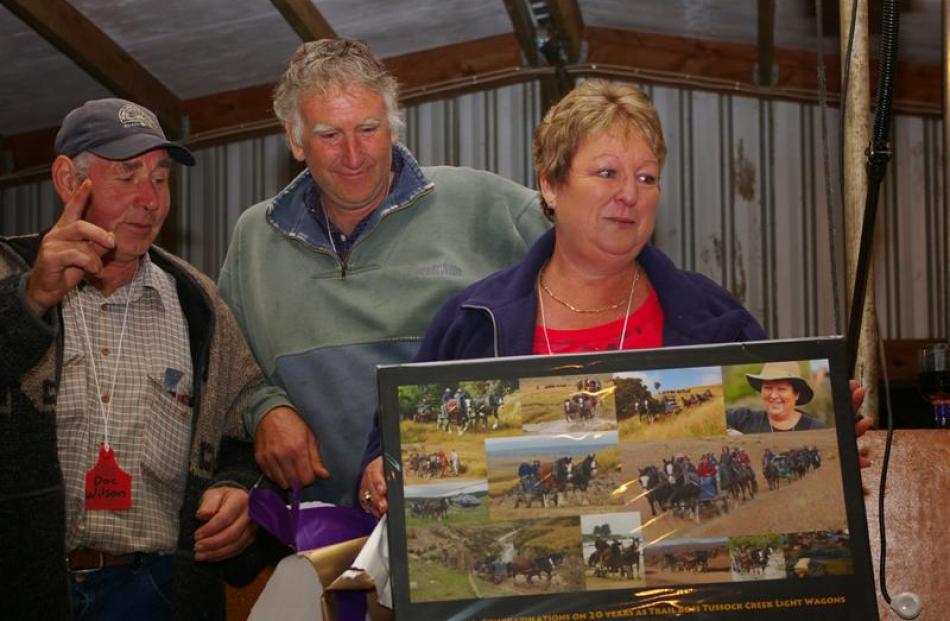 Chris Bayne (64), reacts as she receives recognition on Saturday night from Doc Wilson (left) and John Black for her 20th year as trail boss of the Tussock Creek light wagon trail, before it left from Clinton yesterday. Photos by Hamish MacLean.

A woman who had been kicked by a horse was airlifted to Dunedin Hospital by helicopter during the first day on the Tussock Creek light wagon trail on the Otago Goldfields Heritage Trust's cavalcade yesterday.

The woman was understood to have suffered a broken leg in the incident about 11.30am, as the trail neared the Pomahaka River, after leaving Clinton.

The group was about 10km along the trail.

Head wrangler John Black, of Clinton, transported the injured woman to Clinton where she was met by helicopters.

''She was in a lot of pain,'' Mr Black said. He could not confirm the woman's age or place of residence.

It was the second such incident he had experienced in his 16 years as a part of the cavalcade.

He said the weather had cleared and the remaining 63 members of the group were in good spirits as the day had warmed up.

The trail covers roughly 35km each day as the group travels from Clinton to Outram to meet up with the 470 cavalcaders to enter Outram together next Saturday. Three walking trails complement the six horse trails, which include one heavy wagon trail and the light wagon trail. Eighty people will walk the trails this year.

Eight cooks and crew from the North Otago Scouts prepare meals for the riders as a major fundraising effort for the scouts.

The trail boss on the ride Chris Bayne (64) was honoured in a short ceremony on Saturday night, as it was her 20th ride as the trail boss.

''I can remember I did the first cavalcade and I didn't really like it,'' she said. Sharing the roads with cars that did ''100 miles an hour'' did not impress her, she said.

Two years later she was asked if she wanted to be trail boss and she accepted.

''And then I've got this motley crew behind me and I can't let them down.''