By Richard Davison
0 Comments
Descendants gathered in the remote Catlins on Saturday for the reopening of a "magical place".

Among about 80 people attending a ceremony to mark the reopening of the Chaslands Heathfield Cemetery was Tokanui man Nelson Gutsell.

One of several speakers during the event, Mr Gutsell recalled discussions taking place in a relative's front parlour regarding the formal closure of the cemetery, in 1969.

Despite that closure, and the subsequent disappearance of the cemetery beneath rampant broom, he said he and his whanau had continued to pay homage to their ancestors buried there. 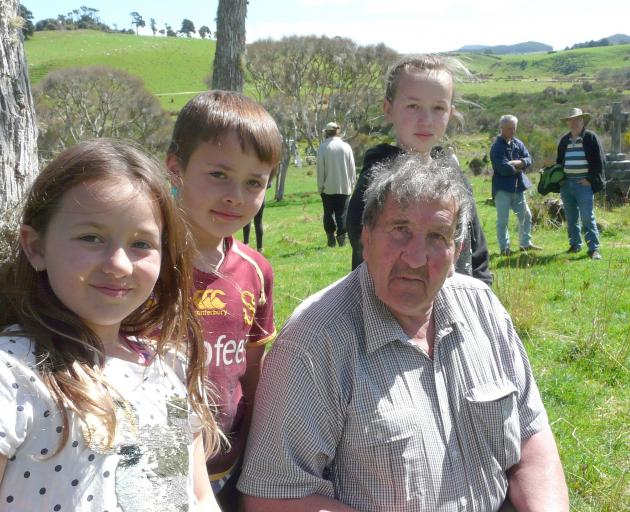 Among Catlins descendants of those buried in the newly reopened Chaslands Cemetery, near Papatowai, are (from left) Catlyn (9), Rory (8), and Aimee Beale (11), and grandfather Nelson Gutsell. PHOTO: RICHARD DAVISON
"Both my great grandparents, their son, my grandfather, a great uncle and his son are all buried here, so it feels quite emotional today to be able to approach their actual place of rest.

"We used to come fishing at Chaslands Beach and call in on the way, but of course for years you couldn't get anywhere near the plots. It's super just to walk in and spend a moment of quiet. They've done a marvellous job."

Restoration of visitor access to the 121-year-old cemetery - it remains closed to further burials - was inspired by the research of Catlins Historical Society members Mike and Anabel McPhee into the contributions of Catlins soldiers to World War 1.

Researching a book on the subject in 2016, they discovered the site buried beneath undergrowth, and wholly inaccessible.

Since then, the society had joined forces with Catlins Promotions, the Owaka Lions, the Department of Conservation, Clutha District Council, the Otago Community Trust, and several neighbours and local volunteers to clear and reform a 250-metre path and car park, and clear the cemetery itself.

"This is a very special spot. Today is a celebration that anything can happen when people work together."

Her husband, Catlins Promotions chairman Fergus Sutherland, highlighted two new interpretation panels that related the history of both Chaslands, and the cemetery itself.

He said Chaslands originated as a governmental "Improved Farm Settlement Scheme" in 1894.

Although it struggled due to its remoteness and poor soil fertility, a subsequent wave of logging activity from the 1930s gave it a new lease of life.

The final burial recorded at the cemetery was in 1941 and, as logging dwindled, it closed officially in 1969.

Sharing a moment with his grandchildren beneath one of the cemetery's tree daisies (Olearia lineata) Mr Gutsell said the combination of history and natural beauty would be a draw for future visitors.