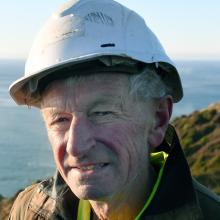 Kim Rapley, who with his team is building a fence around the lighthouse.
Happily, for once, it was not an emergency rescue for Helicopters Otago, but instead a special delivery of building supplies to Nugget Pt for contractor Kim Rapley Fencing, of Dunedin.

Mr Rapley said due to the extreme nature of the Maritime NZ worksite — the nine-metre lighthouse and Catlins tourist magnet sits nearly 80 metres above the roiling Southern Ocean — the devil was in the detail.

"The team’s needed a good head for heights and precision engineering on this one, as we’re installing a 40-metre fence more or less at the cliff edge with just a metre’s grace between you and the drop off.

"Normally a 40-metre fence would be done in a couple of days, but this will be a fortnight before we’re done on Friday," he said.

The Bell 206 Jet Ranger helicopter had also needed to work within exacting parameters, as its 350kg cargoes of 5-metre lumber, suspended on a 30-metre cable, only just fitted on the narrow clifftop plateau.

Helicopters Otago pilot, Andy Baird, swings a 350kg load of timber on to a small deck beside the Nugget Pt Lighthouse in the Catlins yesterday morning. PHOTOS: STEPHEN JAQUIERY

Mr Rapley was no stranger to precipitous projects, having worked previously on high country farm fencing contracts and at Fiordland’s Deep Cove and West Arm.

However, he said this latest had been among the most challenging — not least because of the weather which had been chilling.

"We’ve had some very murky, drizzly days, down to minus-four degrees, he said yesterday.

"Turns out the best tool we’ve brought has been woolly gloves and singlets."