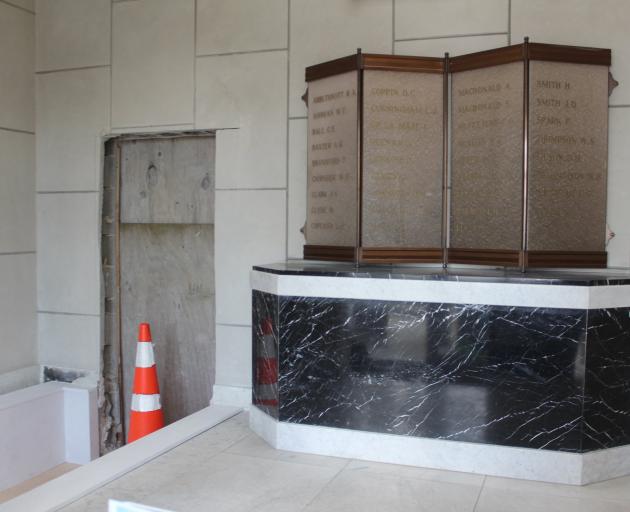 An exhibition and mural commissioned by the historical society to be installed in the former Balclutha Borough Council boardroom at the Balclutha War Memorial Hall was scheduled to be opened next month.

However, following complaints from a ''small handful'' of the public, historical society president Kevin Barron was asked to cease work on a ''hole'' in the wall which was made next to the memorial hall's Roll of Honour.

Clutha Mayor Bryan Cadogan said there were concerns with sensitivity and respect issues in regards to the Roll of Honour and monument next to the hole or entranceway.

He only halted the work to the wall not the whole exhibition itself.

Mr Cadogan believed there should have been proper consultation made with affected groups such as the Clutha District RSA and the wider community before going ahead with work next to the Roll of Honour.

There was ''angst'' among the council after seeing the work on the wall.

''It is totally inconceivable that anyone would cross over to altering a memorial without knowing that there are some standards and criteria and protocol that must be met,'' Mr Cadogan said.

Mr Barron said at no point did council staff indicate he needed to consult with other parties such as the RSA or the community.

He was given an exemption for the building consent and had met building standards with the development of the exhibition.

Mr Barron said allegations the council was not informed about the hole or entranceway ''were untrue and do not reflect the facts''.

It was clearly communicated to councillors from the outset there were plans for the hole in the wall at the Roll of Honour site, he said.

While the monument in the foyer depicted the sacrifice of those inscripted on it, the hall itself was ''the actual memorial'' - hence the building was named the War Memorial Hall.

In hindsight, Mr Barron said he could have considered consulting with the RSA before starting the work and would have done so had he been told to.

Since making contact with the RSA following the complaints, Mr Barron said it had ''no hassle'' with what he was doing.

The complaints came from a ''handful of people'' which he described as the ''vocal minority'' being considered above the ''silent majority''.

Work on the exhibition was to continue. However, its opening had been delayed by about four weeks.

The framework of the entranceway was to be tidied up before the opening.

Mr Cadogan said the wall must be in reinstated in full if the Roll of Honour memorial remained in its current location or restored if it was later relocated within the town hall.

Future work on the hall will later be decided as part of the War Memorial Hall project which formed a part of the ''Our Place Balclutha Community Plans''. Mr Barron is leader of its co-ordinating group.