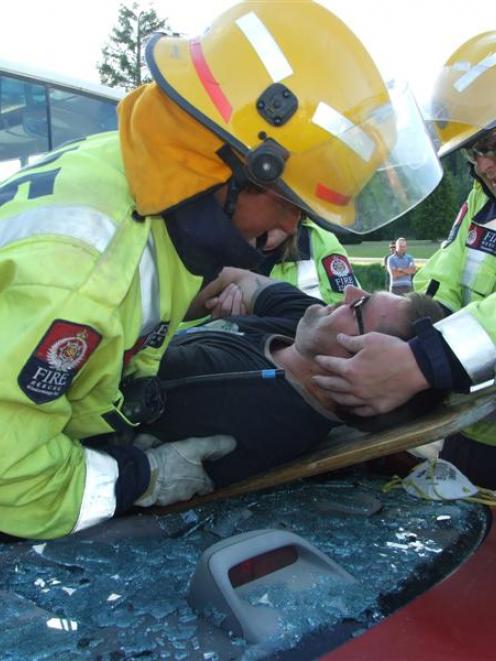 Emergency services were called about 7pm to a ''crash'' involving a car carrying four people and a bus carrying about a dozen passengers on Waipori Rd.

Firefighters from Lawrence and Waitahuna, and Lawrence St John took part in the event and some St John staff from Dunedin also attended.

The exercise covered a range of skills from setting up a triage centre, extracting injured people from the damaged car using cutting equipment, to controlling traffic and keeping the crash scene clear.

He was ''very pleased'' with the exercise, which tested Lawrence and Waitahuna members of the three services as well as new recruits.

It took about an hour and-a-half and finished with a debriefing at the nearby Lawrence Golf Club. 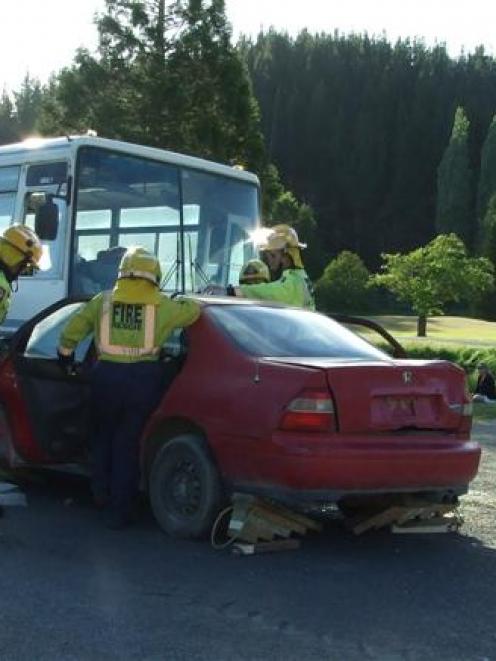 The 'crash' scene at Wednesday night's realistic-looking exercise. Photos by Helena de Reus.
''It's good to do it without the stress of a real situation.''

The brigade had about 12 operational staff, and experienced daytime shortages because many volunteers worked outside the township, he said.

Heavy snow hit Lawrence hard in June and kept emergency services busy with a range of callouts, from fallen trees to vehicles sliding off the road or stuck in snow drifts.

Lawrence St John station manager Bronwyn Paterson said St John, too, was short-staffed during the day, but there were about 17 volunteers who covered night rosters well. Anyone keen to volunteer for Lawrence day shifts with St John is asked to contact her (03) 485-9303. Anyone interested in joining the fire brigade can contact Mr Tisdall or Snr Const Wallace.

He praised those involved with the exercise, saying it was ''really realistic'' and that he was pleased with its outcome.