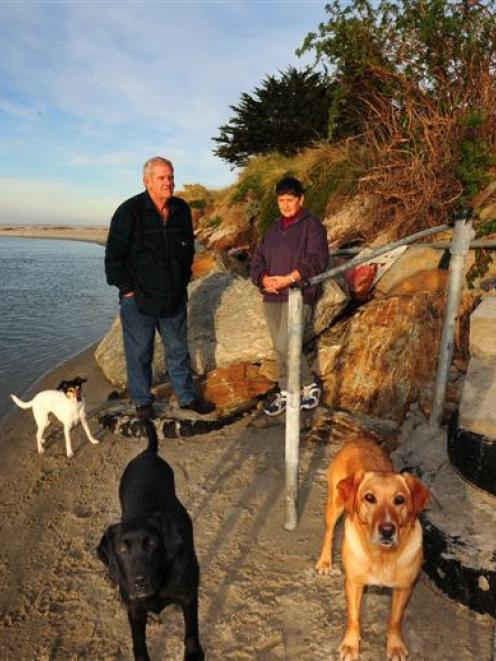 Bruce and Ruth McLean with their dogs (from left) Hope, Meg and Pip beside their recently reinforced bank and new steps which protect their Toko Mouth crib from storm surges. Photo by Craig Baxter.
Toko Mouth resident Bruce McLean knew if he did not do something about the sea encroaching on the front of his home, it would not be around much longer.

So, he was not surprised by the Otago Regional Council's latest natural hazard report which predicted Toko Mouth, a settlement 15km east of Milton, could be the worst affected by a storm surge, reaching 2.36m above mean sea level.

With his wife Ruth, Mr McLean (67) had been living permanently in a 70- to 80-year-old crib at Toko Mouth for 15 years, but had been coming to the area all his life. Sand had been washed away progressively from the narrow mouth, making it wider, he said.

"I've seen this going on . . . for that many years. It doesn't change things really.

"The seas will come in and knock the hell out of us."

A few months ago, he noticed increasing big seas were starting to knock down the bank in front of his two-bedroom crib, which was the third from the mouth.

The seas had already cleared his neighbour's front yard.

So, he brought in loads of big rocks to reinforce the bank and built concrete steps down to the beach.

"I felt if I didn't do something about it, I'd soon not be here."

The bank, about 12m in front of his family's crib which was one of the first built at Toko Mouth, was concreted about 10 years ago to stop the sea coming in, he said.

Living with the sea was part of the lifestyle of the settlement and hazard reports would not frighten him off, he said.