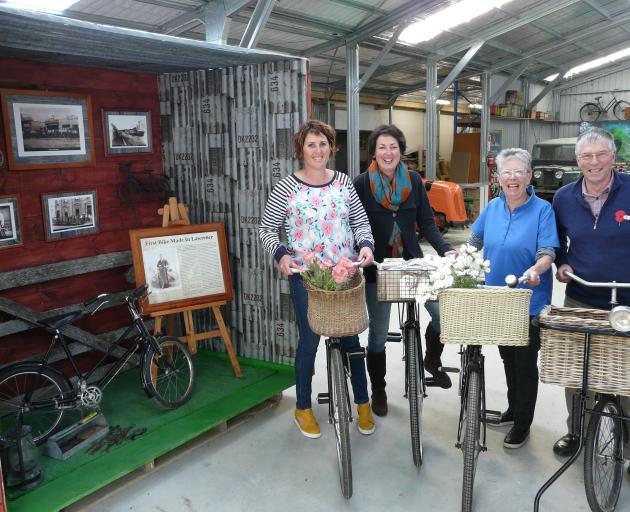 In 1893, a 20-year-old Lawrence blacksmith called Patrick O'Leary decided to challenge his skills by building the first pushbike in the country, made (almost) entirely from scratch.

In order to do so, he first had to make the specialist tools required but, quickly overcoming this obstacle, he was soon successful, with the sole additions of pre-made rubber tyres, and a chain.

The Tuapeka Times of the day recorded the new two-wheeled Kiwi "compared favourably with anything of the kind imported from Home".

Mr O'Leary went on to teach the postmistress of Lawrence to ride down Ross Pl, although sadly the result of this early experiment along the then mudbound highway is lost to history.

Inspired by this story, and by the popularity of the traditional delivery bike advertising her Ross Pl business Blue Spur Butchery & Deli, Jan Harper contacted the Tuapeka Vintage Club to gauge interest in a more extensive display that would celebrate the historic links between Lawrence and cycling. 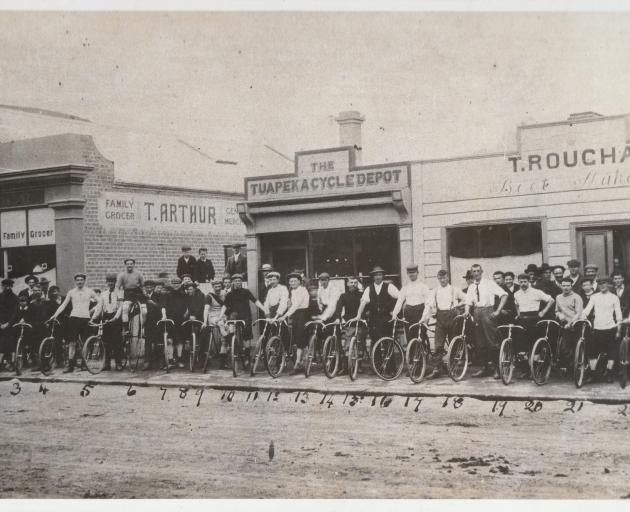 The Ross Pl start line for the Lawrence Cycle Club race to Waitahuna and return,1901. PHOTO: TUAPEKA GOLDFIELDS MUSEUM
"The bike acts as a great drawcard to attract attention from passers-by for the butchery, and I thought perhaps it could help other businesses and the town as a whole if we make something out of this interesting historical association, especially given the new cycle trail passing through town."

Her original concept included vintage bikes placed strategically along the town's main street, and a purpose-built display detailing the history.

Both have now come to fruition, and are expected to be in place shortly.

"Thanks to the willingness and skills of Gordon [Duthie] and the vintage club, and the detective work of Sarah [Homer] and Mel [Foster] of the Tuapeka Lawrence Community Company, we've accumulated and restored several bikes, and now have this wonderful display."

The display unit would be placed in an empty shop front opposite the butchery, where Mrs Harper hoped it would "give people another reason to stop in Lawrence".

"I'm originally from Invercargill, but I'm passionate about this town, and sometimes you need to put something in to get something out, for the benefit of all.

"We're proud to be showing off our cycling history," she said.