Last year’s event was cancelled due to the Covid-19 lockdown. Scholten added Saturday’s victory to his 1999 winning sprint, both of which were notched up in his Mitsubishi Evo.

Road conditions improved steadily during the day and several among the 44 drivers competing — including Scholten — recorded their best times during the sixth and final run.

This year Scholten just cracked 10 seconds, at 9.99sec, to take top spot on the podium, beating his 1999 time by nearly half a second. 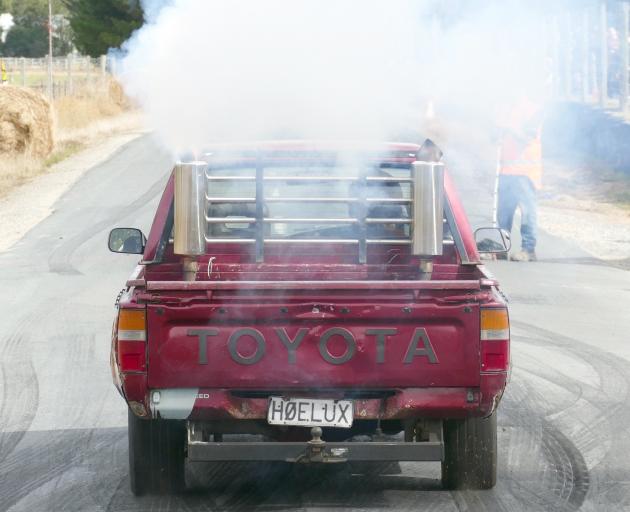 The 4-litre Toyota ‘‘Hoelux’’, driven by Jenna Cunningham, of Waitahuna, smokes it up before the start line at the Lawrence Quarter-Mile Drags on Saturday. PHOTO: RICHARD DAVISON
However, the course record of 9.4sec, set by Lawrence pair Chook Ryder and Roger Binnema, in a T-Bucket in 2007, will stand for another year.

Event convener Bill Bazley said he hoped that might change next year, during what would be a special anniversary for the drags.

"We have our 30th anniversary coming up next year, so we’re expecting that to draw a few people out of the woodwork and, given good conditions on the day, perhaps we’ll see that record fall."

He said although competitor numbers were down slightly this year, a capacity crowd had turned up to support their efforts.

"I think there’s just a lot happening over Easter. Usually we don’t clash, so we get a few more entrants, too."

Mr Bazley was particularly heartened by the large number of younger entrants taking part this year.

"There’s a whole new generation coming through. We’ve got one family with four youngsters entered this year, and another with three, so they’re going to be the standard bearers that keep the drags going forward."

The drags were all about participation, he said.

"We have everything here today from the big V8s to a wee open-top Triumph Special with a 1147cc engine.

"It’s just a chance to test your and your car’s talents, under well-organised, controlled conditions, as safely as possible."