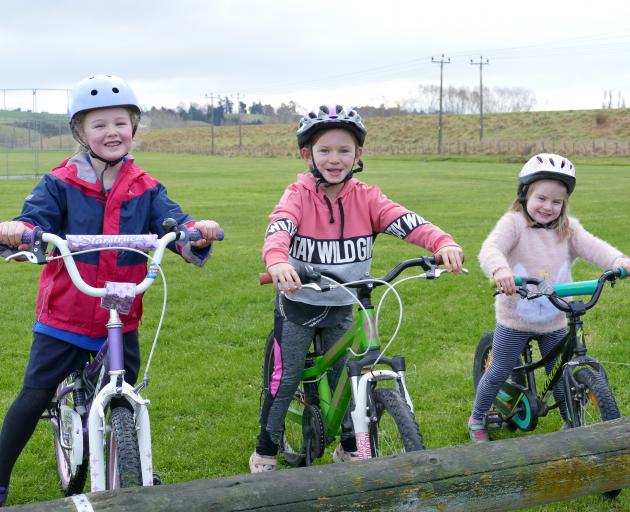 Young Balclutha cyclists (from left) Liberty van Asperen (6), and sisters Samara (7) and Emily Sutherland (4), cannot wait to explore a new bike park at the town's Centennial Park, where construction begins this month. PHOTO: RICHARD DAVISON
Young cyclists are getting pumped about the prospect of a new junior bike park in Balclutha.

Conceived as part of Clutha District Council’s community plan for the town in 2017, project managers for the cycling area, the Naish Park Co-ordinating Group, said they expect contractors to be able to get into gear and start construction work within the next fortnight.

Group chairman Jared McPhee said the bike park — the first stage of a multi-phase redevelopment of Naish Park — would come with a local flavour.

"This is a community project, and we’d love to hear from businesses, individuals and community groups who’d like to sponsor a street name in the park.

"It’s just one of many ways we hope to involve the local community as the wider project unfolds."

Located in the adjoining Centennial Park — known locally as "Old Boys" — the paved "learn-to-ride" area would include a roundabout and intersections, helping develop riding skills and co-ordination. The simulated road intersections would help in fostering an understanding of basic road rules.

He said much work had gone into behind-the-scenes planning to reach this point.

"This has really been a labour of love for members of the group and to now be in a position to see this vision coming to life is very rewarding.

"We’re really excited for the community to be able to share in this facility taking shape."

Later stages will include a cycling "pump track", a dog park and new playground.

Although the group would not release detailed budgets for the project, the bike park was expected to use all of a $50,000 grant from the Trusts Community Foundation, and a portion of earlier $250,000 seed funding from the council.

For eager rider Liberty van Asperen, it could not come soon enough.

"There are no cars so it’s safer," she said.

"I can have fun with my friends."