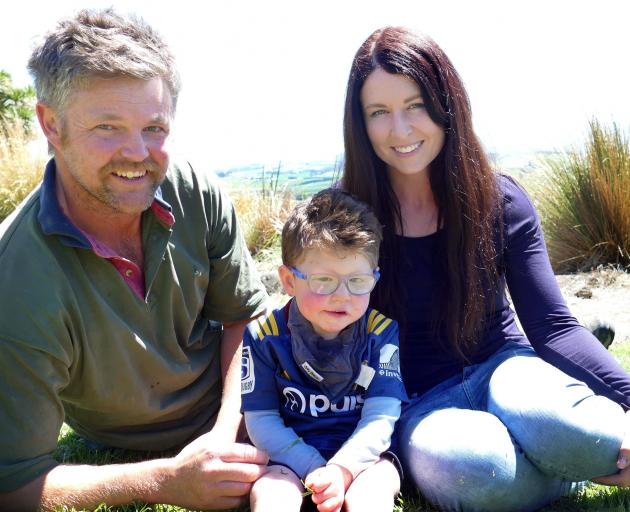 The Wells family, Andy, Emilee, and son Harri (3) enjoy the sun at their Clinton farm yesterday. South Otago Cricket is holding a fundraiser on Saturday, to help pay for further treatment for Harri’s rare genetic condition at a specialist Sydney clinic. PHOTO: RICHARD DAVISON
A little Southern Man is about to get a big Southern hand-up.

The South Otago cricket community is stepping up to raise funds for Clinton boy Harri Wells, during its twenty20 finals day on Saturday.

The 3-year-old was born with a rare genetic condition that left him unable to use his muscles effectively, and suffering from developmental challenges and seizures.

Dad Andy said he and wife Emilee had been frustrated by a lack of intervention from New Zealand medical services in addressing Harri’s symptoms, and had instead looked abroad for help.

Three weeks of intensive therapy at Sydney’s NAPA (Neurological and Physical Abilitation) Centre, when Harri was 18 months old, had been a "game-changer", and the Wells hoped to repeat the treatment in April next year.

Mr Wells said the family had been "overwhelmed" by the continued generosity of the community.

"We had a lot of support from the local community in getting Harri to Sydney the first time round, so when we learnt he had been nominated as a beneficiary of the cricket fundraiser this year we were amazed.

"Harri’s a happy, sociable, loving little boy, so we just want to give him the best possible chance of leading a fulfilling, independent life we can."

Mrs Wells said the unnamed syndrome — which affected only 15 to 30 people worldwide — manifested in a wide range of developmental and other symptoms including atonic cerebral palsy — the inability to use muscles effectively.

Harri had required intensive physical therapy to learn to crawl, walk and sit up, and had issues with breathing and digestion.

"He’s come such a long way, and that’s down in large part to work started at NAPA, and with Conductive Education in Port Chalmers.

"It’s super rewarding when you see him gain a new skill, even if it might appear something quite small to an outsider."

Mrs Wells decided to devote herself full-time to her son’s care, and had left her job as a kindergarten teacher to do so.

That meant fundraisers such as South Otago Cricket’s made all the difference to the family’s quest, she said.

"Although the seizures have knocked Harri back a bit, we believe he has a long way to go and can make big strides still, especially with such amazing support from the community."

Mr Wells said he hoped to make a Southern Man of the determined youngster through the most Southern of traditions.

"We sell swedes at the farm gate to raise funds for Harri.

"It would be nice if he could farm and sell them himself one day."

South Otago Cricket is raising funds for "Harri’s Big Splash for Cash" through a Facebook auction and events taking place at the Balclutha Showgrounds from 9am on Saturday.