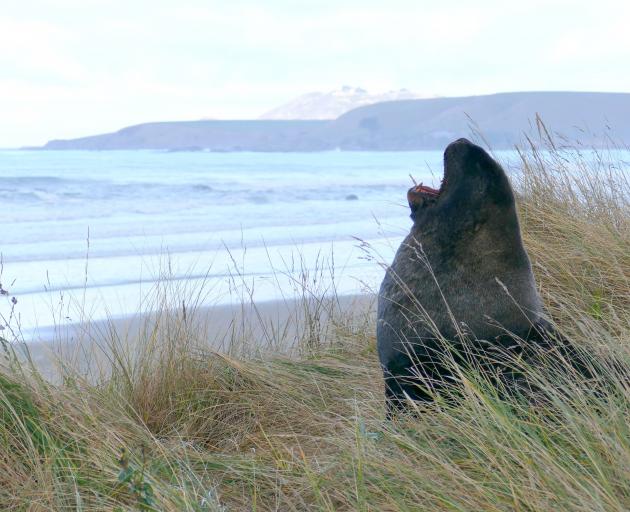 Doc says reports of harassment of a resting bull sea lion at Kaka Pt yesterday are "unacceptable". PHOTOS: RICHARD DAVISON
A Kaka Point resident is shocked by the repeated harassment of visiting sea lions at the popular Catlins beach.

Businesswoman and mother Louise Thompson has a home office opposite the adjoining dunes, and said two or three times a year the large ocean-going mammals would visit.

She said a bull sea lion had been trying to rest outside her office window for the past two days, but had been "harassed" continually during that time.

"It ranges from getting too close, to shouting and whistling, to poking and throwing sticks.

"I’ve seen people taking selfies a couple of metres away in the past."

She said although about 80% of human visitors were respectful — keeping their distance
and reducing noise — others appeared to be ignorant at best or, at worst, behaving in a genuinely malicious manner.

"I had to go out and challenge a man today who threw a stick at our visitor. He shouted at me to ‘eff off’, which is probably what the sea lion wanted to say to him."

Doc’s Owaka biodiversity ranger, Cheryl Pullar, said that reports of "unhelpful" human interactions with sea lions and other marine mammals in the Catlins had dropped in frequency recently due to reduced tourist numbers.

She said the animals only came to shore to rest, and were "generally" more passive as a result.

"They usually won’t chase unless provoked. Something like throwing a stick is just unacceptable, and is the sort of harassment we don’t tolerate."

She recommended keeping a distance of 10 metres for resting animals, and 20 metres for those that were active.