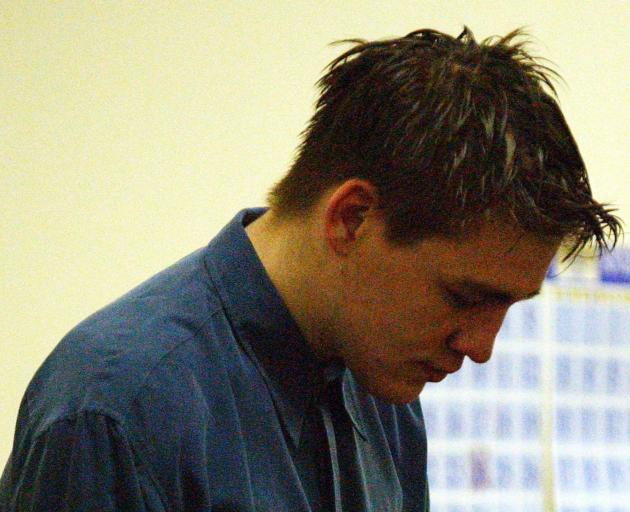 Robert Lyon (pictured in the High Court at Dunedin in 2002) has completed much academic study. PHOTO: ODT FILES
A murderer who has been behind bars for more than 17 years looks set for a prison transfer to help him study for his PhD.

Robert Stanley Lyon was sentenced to life imprisonment with a minimum of 15 years in 2002 over the murder of 29-year-old wool-handler Jodie Kiri Louise Browne at her Milton home.

The Parole Board described the killing as “a terrible attack” which Lyon, who was 19 at the time, attempted to disguise through arson.

He appeared before the board last month, but was declined, because a psychological report suggested the prisoner needed a more focused release plan and further integration into the community.

Panel convenor and board chair Sir Ron Young described Lyon as “an excellent prisoner”, who had obtained several academic qualifications while serving his sentence including a Masters degree.

When he saw the board last year, he had his sights set on a PhD and it was confirmed at last month’s hearing that he now had approval.

Lyon is currently in Waikeria Prison in Waikato.

Sir Ron said the best course of action would be for Lyon to be transferred to another prison closer to where he would ultimately be released.

That location was withheld.

Once there, Lyon could attend university with the help of a sponsor.

“That would provide testing, it would be appropriate to Mr Lyon and also support his PhD programme,” Sir Ron said.

Lyon would also be able to contact church groups in the area which he had indicated he would like to join.

While the prisoner had excelled academically, the board was still concerned over his insight into his offending.

“On questioning of him we think he rather underplayed his involvement in the offending,” Sir Ron said.

“We note he has very limited social support in the community and although currently controlled, he still has a sexual fetish that gave rise to his offending.”

The course ahead, he believed, involved testing Lyon outside the prison setting.

“We are satisfied that Mr Lyon has completed the rehabilitation part of his sentence but he now needs a period of reintegration,” he said.

He will be seen again by February next year.