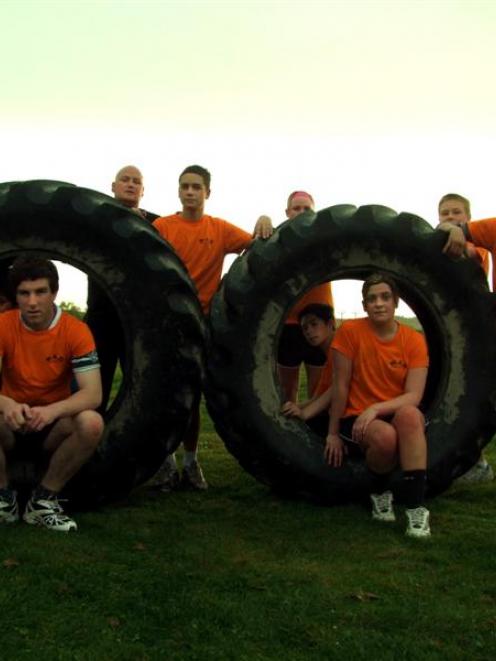 Warming down after a workout at the Balclutha Centennial Pool are participants in the Clutha Cactus Challenge (back, from left) Bridget Holgate, Stephanie Goatley, youth co-ordinator Daniel Maze, Cohen Tuhou, Kirsty Kearon, Jason Taylor, Zane Currie, fitness trainer Paul Skipper, and (front, from left) Jacob Noanoa, Steven Gallagher, Taemaro Erihe and Jessica Mead. Photo by Glenn Conway.
They are being made to work hard and are loving every minute of it.

Ten young Clutha people are taking part in a new kind of training programme designed to give them the skills and self-esteem to find work and become healthier people in both body and soul.

The Cactus Challenge is a 12-week physical challenge programme in which trainer Paul Skipper is putting members of the group through their paces while they are being tutored on healthy eating, as well as on job and training options.

Youth worker Daniel Maze said the approach was totally different but one which he believed would be successful.

"It will help develop healthy, fit, motivated young people with high self-esteem who can make informed career choices," he said.

While some people might call the programme a "boot camp" type of arrangement, Mr Maze said it aimed to improve fitness levels and self-esteem instead of forcing participants to go through arduous sessions where they did not like the challenges placed in front of them.

It was a new approach and one he hoped would be repeated for others in the future.

Some of the participants said it was hard work but they were enjoying the fitness challenges laid out by Mr Skipper.

Mr Maze said the group was steadily improving every week "even if some of them are using muscles they have never used before".

- A nutritional programme including a shared breakfast with other participants three times a week.

- An introduction to careers including career planning meetings.

- A meeting with Mr Maze to explore possible career paths.

- Mentoring and other ongoing programmes.