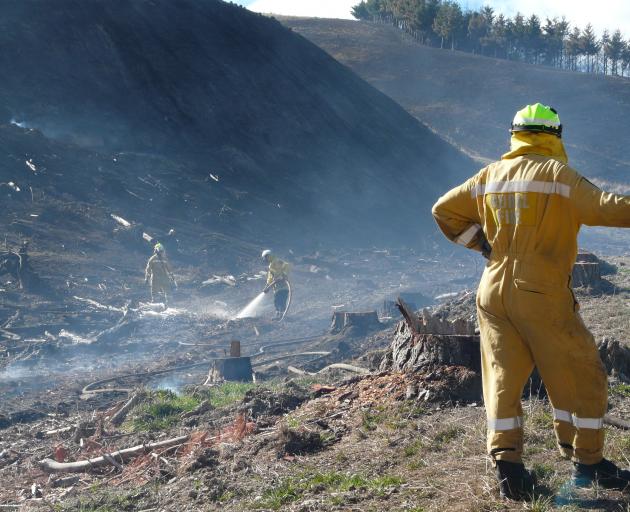 As a result of continuing strong winds, firefighters remained on site yesterday to damp down hot spots, and prevent the fire from extending any further within neighbouring farm properties off Roughan Rd, about 4km southwest of Lawrence.

Although the fire was permitted, and embers had been covered using a digger after the burn-off was complete, gale-force northwest winds had sparked the fire up once more, and caused it to spread to neighbouring land, Deputy Principal Rural Fire Officer Jason Sarich said.

"So we've got a case here where the burn-off was conducted according to the rules and under permit when conditions were relatively benign last week, but since that time strong winds have managed to get it going again and pushed it through the gully here, where it's caught some grassy paddock and a wee stand of pines at the top of the hill.

"It's just an example of the extra vigilance required when conducting any fire activity under these conditions, before, during and after it's concluded.''

Crews from nine brigades and units had worked together to contain the blaze after Fire and Emergency NZ was notified about 5pm Sunday, and crews from the Wakari Voluntary Rural Fire Force, City Forests and Lister Helicopters remained on site yesterday.

"We've got some deep-seated hot spots through this slash here in the gully, so the challenge remains for our teams to dig them out and cover them with foam, and lay down containment lines around the perimeter.''