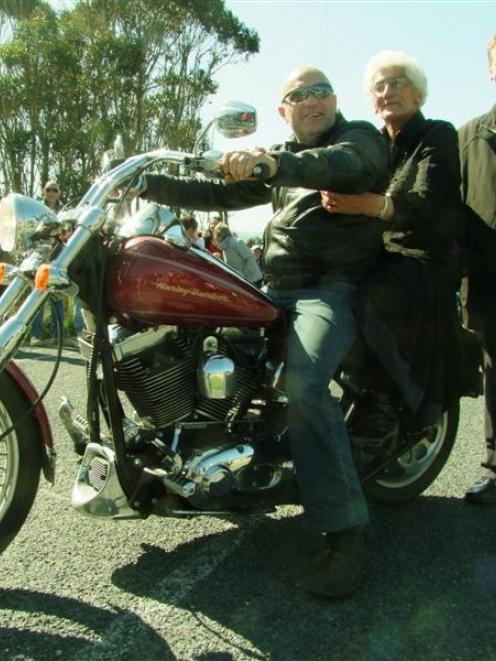 Long-time Kaka Point resident Rona Williamson and Clutha-Southland MP Bill English (right) chat with Balclutha motorcycle enthusiast John Hasler from the Penguin motorcycle rally after the official opening of the nearby Karoro Creek and Ahuriri Flat Rds near Kaka Point on Saturday. Photo by Glenn Conway.
The occasion may have been the opening of two newly sealed tourist roads but the biggest cheer was saved for when a popular long-time Kaka Point resident was coaxed on to a motorcycle to become the first person to travel on the new tarseal.

Rona Williamson, who is in her 80s, helped Deputy Prime Minister and Clutha-South-land MP Bill English cut the ribbon in a brief ceremony on Saturday that signalled the end of a $1.65 million sealing project.

More than 200 people gathered at the Kaka Point end of the Karoro Creek Rd for the event that featured a parade of motorcycles.

Their riders had gathered at the nearby Willsher Bay Domain for the annual Penguin Rally.

One of those motorcycles, ridden by Balclutha enthusiast John Hasler, took centre stage moments after the ribbon-cutting, when Mrs Williamson hopped on the back and was taken on a very brief but significant ride.

It may have been a 10m journey but it signalled the first official transport on the recently sealed road.

Contractors, council officials and Mr English then gathered at the Kaka Point Community Hall for speeches and afternoon tea.

The two roads are part of the Kaka Point loop of the Southern Scenic Route, connecting the township (and the Nugget Point Lighthouse Rd) to the Owaka Highway and The Catlins.

The $1.65 million sealing project was funded with help from the Regional R Fund, made available by the New Zealand Transport Agency (NZTA) through the extra 5c fuel tax which has been levied per litre of fuel sold since 2005.

Clutha Mayor Juno Hayes said the sealing of the 4.84km Karoro Creek Rd and 840m of Ahuriri Flat Rd had created a safer environment for locals and tourists alike.