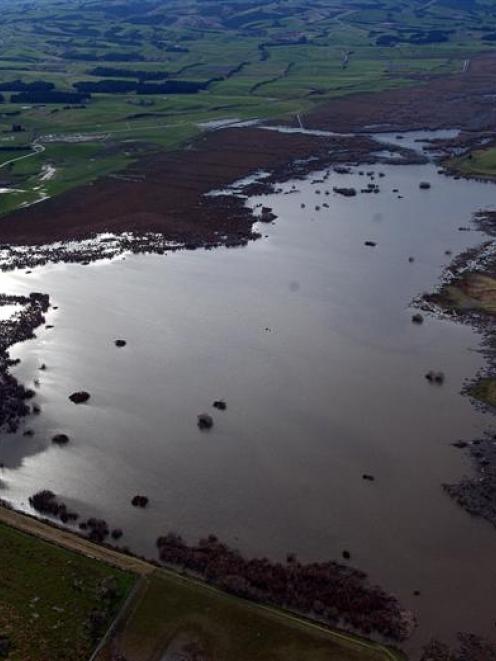 ORC land resources officer Rob Schick said a water quality sampling network had been established in the Lake Tuakitoto catchment and regular monitoring had been conducted since September last year.

He said the focus of the new catchment programme was on landholders and ORC staff sharing information, particularly around reducing the discharge of contaminants to water, especially sediment and phosphorus.

The catchment starts in Pukekoma and includes part of Hillend, Stony Creek, Crichton, Lovells Flat and Benhar, and finishes at Lakeside, near Kaitangata. The main bodies of water are Lake Tuakitoto, Frasers Stream, Lovells Creek, and Stony Creek.

Last month, the regional council held a field day at Lovells Flat to share the results of the water quality sampling with landowners. 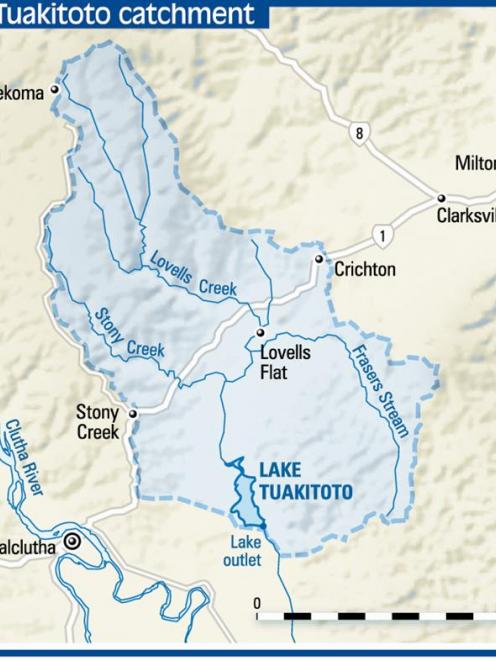 ORC water quality scientist Rachel Ozanne said Lake Tuakitoto was very shallow, estimated to have an average depth between 0.3m and 0.7m. Testing showed phosphorus in the lake was increasing.

High levels of phosphorus can cause excessive plant and algae growth, which can block water intakes and make water unpleasant for swimming and drinking. It can be caused by stock effluent, phosphate in fertiliser, and soil sediment.

It was possible stock effluent was leaching into very small tributaries.

She said it was a ''pretty steep'' catchment, with a low volume of water, and it did not take much to elevate bacteria concentrations.

Water quality monitoring in the catchment is due to wrap up in August and a report is to be released next year.

The meeting also gave landowners a chance to raise concerns around the consenting process required for some work to improve water quality.

Bryce Clark, of Lovells Flat, said the lower area of the catchment was prone to extensive flooding, and in the past ORC consents to carry out improvements to waterways had sometimes been expensive.

Mr Clark said he got ''quite a shock'' when his final consent bill arrived after removing gravel bars which had built up in the creek, forcing the water to the opposite side of the bank.

He said past experiences had made him and other landowners wary of applying for resource consents to alleviate erosion issues in the catchment.

''It's not just a landowner issue; it's a community issue. We all want good fishing and clean waterways. We all want to do something to keep our water quality ... it just needs some common sense.''

ORC's recently relaxed rules around bridges and culverts was a step in the right direction.

''We're keen to work with the ORC to find a sensible solution that we can all live with.''

Lindsay Watt, who has a sheep and beef farm at Lovells Flat, said the system was putting some landowners off maintaining waterways.

''My real concern was that on the lower reaches, once the streams come down, erosion can happen.''

To maintain good water quality, sometimes a small amount of maintenance was needed to keep the banks and stream in good condition.

''We want to have the freedom to be able to attend to small things, to minimise them from becoming problems later on.

''We all want to see better quality water - we're all in the same boat as far as that's concerned. We don't need to be restricted by all these rules to improve waterways.''

Mr Watt said an ideal solution would be a local practical person with some authority to come on site to assess what needed to be done and offer advice.

ORC environmental services manager Martin King said there was a consenting process in place for a range of issues from realigning riverbeds or disturbing the riverbed to diverting water courses.

Mr King gave an example around dealing with a tree affecting a waterway. He said branches could be sawn off without a consent, but if the tree or its root ball was in a waterway, a consent was needed, and could cost about $1000.

Consents were not needed to do maintenance around bridges and culverts, as they were permitted activities.

He said landowners might want to use a mitigating approach and look at stock numbers, and fencing to prevent stock getting into waterways.

Landowners could also think about taking a long-term approach by looking at applying for a farm consent (or river-works consent) to maintain waterways.

Resource management director Selva Selvarajah said river-works consents could be a good option for some landowners.

Prices for land use consents needed for improvements to waterways ranged depending on the scale of the activity and the sensitivity of the environment, he said.

Dr Selvarajah said staff tried to keep costs down and the system had been ''tidied up''.

Some applications required written approval from the Department of Conservation, Fish and Game and iwi.

Landowners looking to improve waterways on their properties were welcome to talk with council staff, he said.