Tuwhare's spirit lives on for friends 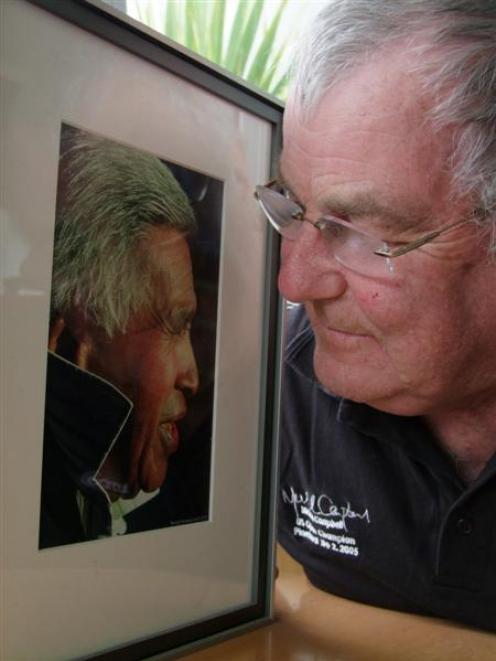 Kaka Point resident Norman Woods looks fondly at a photograph of the late poet Hone Tuwhare, who died a year ago today. Mr Woods and his wife, Glennis, were caregivers and close friends of Tuwhare for the 16 years he lived in the coastal settlement. Photo by Glenn Conway.
He died a year ago today but the spirit of one of New Zealand's greatest poets lives on in the small seaside town he called home for the last 16 years of his life.

Hone Tuwhare lived in the coastal settlement of Kaka Point since he first sought the quiet life in 1992.

While no formal commemoration of his life will be held in the South, it is understood his family will conduct an unveiling ceremony at his final resting place at Te Kotahitanga marae in Kaikohe in the Far North.

Longtime friends and caregivers Norman and Glennis Woods yesterday recounted all that Tuwhare meant to them while, at the same time, scarcely believing it had been a year since they lost their special friend.

"It's still hard to believe at times he's not here," Mrs Woods said.

She and her husband were Tuwhare's constant companions and formed a close friendship as soon as the former poet laureate arrived in the small township 17 years ago.

When his first bouts of ill health struck him, it was the Woods who took care of him, tending to his needs while respecting his independence.

They arranged firewood, ran errands, took him on drives and helped him meet the many challenges elderly people face on a daily basis.

Yesterday, as they reflected on a year without "our Hone", they recalled the happy times, the laughter and infectious humour of the man whose image adorns many paintings and photographs in their seaside home.

The past year had flown by in many ways, Mr Woods said, but he often found it hard to believe his friend was gone.

"Some days, I wake up and think to myself that I must go around and check on Hone only then to realise he's not there anymore."

Mrs Woods said the photographs, poetry and memories of Tuwhare made today's anniversary even more poignant.