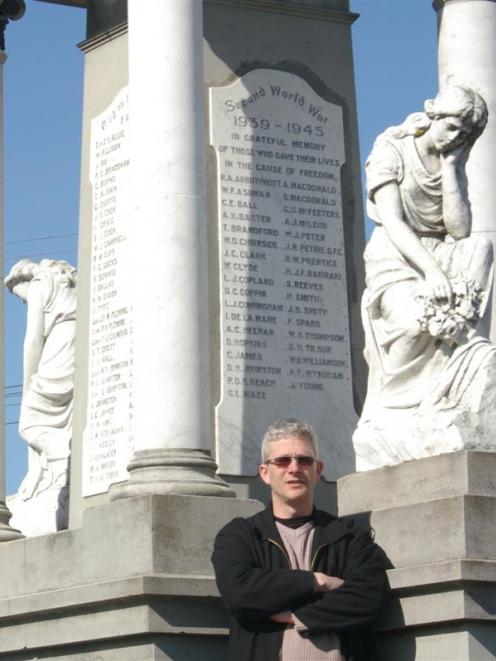 It is the most substantial exhibition the South Otago Museum has ever produced.

Two war memorials, one in Balclutha and one in Noumea, New Caledonia, are the basis of the museum's exhibition that will tour New Zealand next year.

''Never a week goes by'' was a continuation of a World War 1 exhibit held in Noumea in 2011, South Otago Museum curator Gary Ross said.

Not only is it the ''most substantial exhibition'' the museum has done, it is the first to go on a national tour.

The exhibit will open in the Dunedin Railway Station in February, return to Balclutha for two weeks then go to the National Army Museum at Waiouru, Taupo, Blenheim, Nelson, and Hokitika before returning home.

The exhibit, part of the World War 1 centenary, compares the experience of war in New Zealand and France through the town of Balclutha and the French Pacific territory of New Caledonia.

To capture the impact of war on New Zealand, Mr Ross looked at three families whose names appear on the cenotaph at Balclutha.

The lives of William O'Hara, William Pennycook and three Youngson brothers - Robert, William and Alexander - will represent valour, hope and grief for the town that lost 63 men in uniform during World War 1.

''They trained before the war, they signed up for war and they served in Gallipoli, Somme, Passchendaele, and almost made it to Armistice,'' Mr Ross said.

All but Alexander Youngson, that is.

He died in Otago and was buried in Dunedin, a casualty of the Spanish flu, the pandemic that killed 50million people around the globe as the world returned to peace.

His brothers died overseas, but Mr Youngson remained in Otago during the war, working on the railways, an essential industry.

His medical file had made him unable to serve in the war when the flu pandemic began to hit New Zealand.

Attempts were made to prepare for the influenza as it spread through New Zealand, but Mr Youngson succumbed to it when it reached Otago.

''The ladies of Balclutha ... were scrubbing their doorsteps and disinfecting everything, wearing masks,'' Mr Ross said.

A triage station was set up at St Mark's Anglican Church in Balclutha.

''People died behind the church here,'' he said.

''They [the three Youngson brothers] have lost their father, the mother remarried, two boys have gone to war and have been killed,'' Mr Ross said.

The flu, which might have started in the military hospital in France where Corporal William Youngson had died earlier from a gunshot wound, came to New Zealand aboard the boats carrying troops home.

Alexander Youngson's name did not appear on the memorial in Balclutha, Mr Ross said.

''The only way to get on the monument was to get killed in uniform.

''This guy had survived the whole war running those trains, he had trained but never served and the Spanish flu followed his brothers back from Europe and came down and killed him, so that family lost three.''

Their mother unveiled the monument in Balclutha when it was built in 1923, he said.

The Youngson brothers' story is the story of grief while Sergeant-major William O'Hara's story represents valour.

He was awarded the Distinguished Conduct Medal, but his story, too, was complex.

''He was demoted one time for disobeying an order. The order was to take a bucket of rum to the front line and he disappeared for two days.

''He liked the company of women and he liked to drink,'' Mr Ross said.

''But when it came to the crunch he went over the top and he fought with valour.''

He left his family behind and signed up at the age of 41, but he died in France.

His role as a commander of the Maori contingent allowed Mr Ross to include indigenous people in the story.

Stephane Pannoux, a historian with the heritage consultancy group In Memoriam, from Noumea, had included much of the indigenous Kanak story in France's side of World War1.

But unlike the New Zealand tale, French custom did not allow for a focus on only a few families, Mr Ross said.

The French decided not to use biographies, feeling the three themes of hope, valour and grief were better served by a chronological account of the war's impacts on Noumea.

For the communities in New Caledonia and New Zealand the cost of war was high, he said.

Balclutha's 63 dead was only a fraction compared with the toll from New Caledonia.

Among the many images Mr Ross has included is a photograph of the first Anzac to die at Gallipoli.

''Never a week goes by'' will include 2.8m replicas of the monuments in Balclutha and Noumea.

Mrs Pannoux was working on the translations for the bilingual exhibit, he said.

The nearly $70,000 exhibit has received funding from lotteries, the Otago Community Trust and the New Zealand France Friendship Fund.