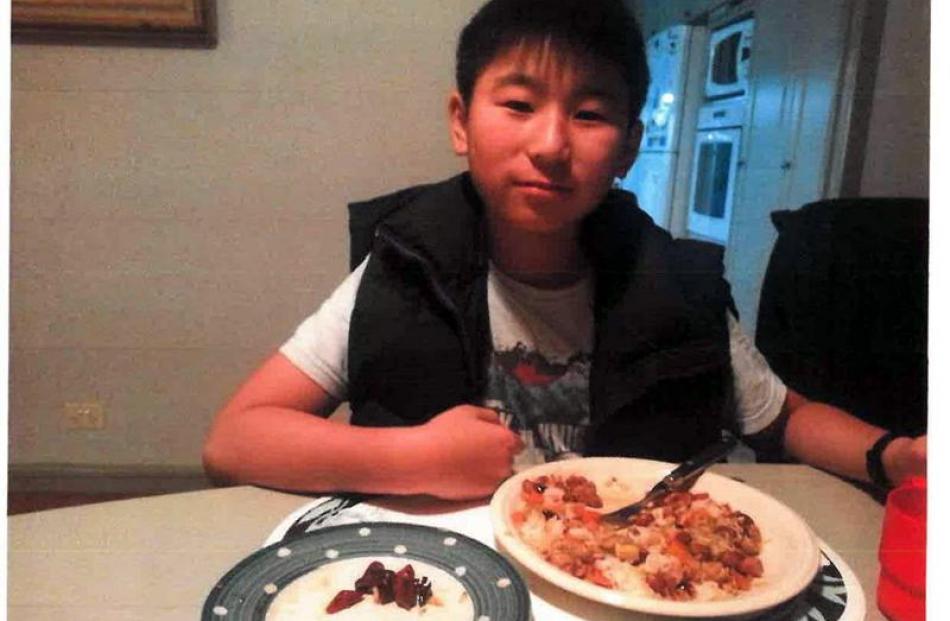 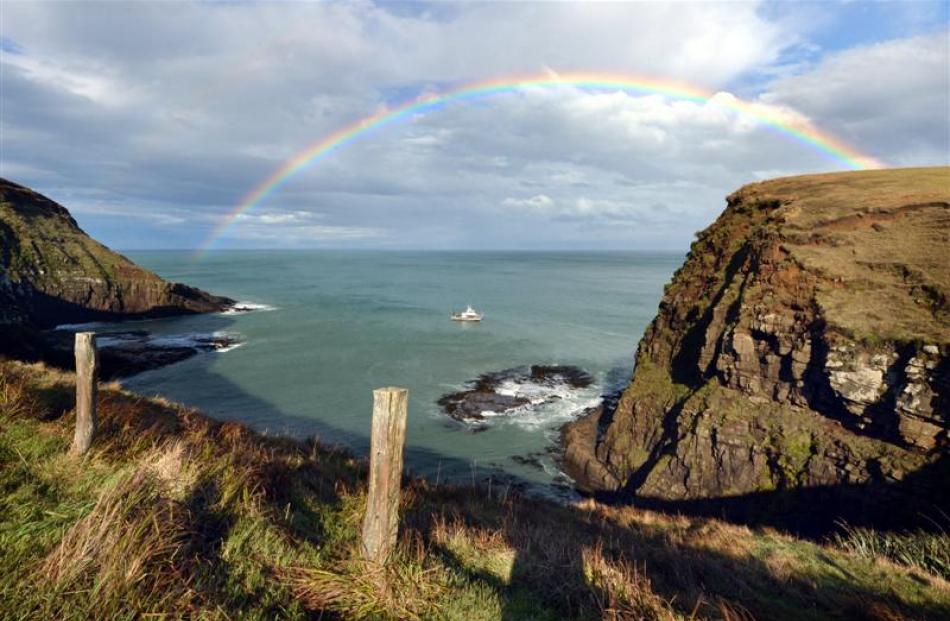 A rainbow breaks out as the remaining wreckage is lifted on to a boat. Photos by Stephen Jaquiery. 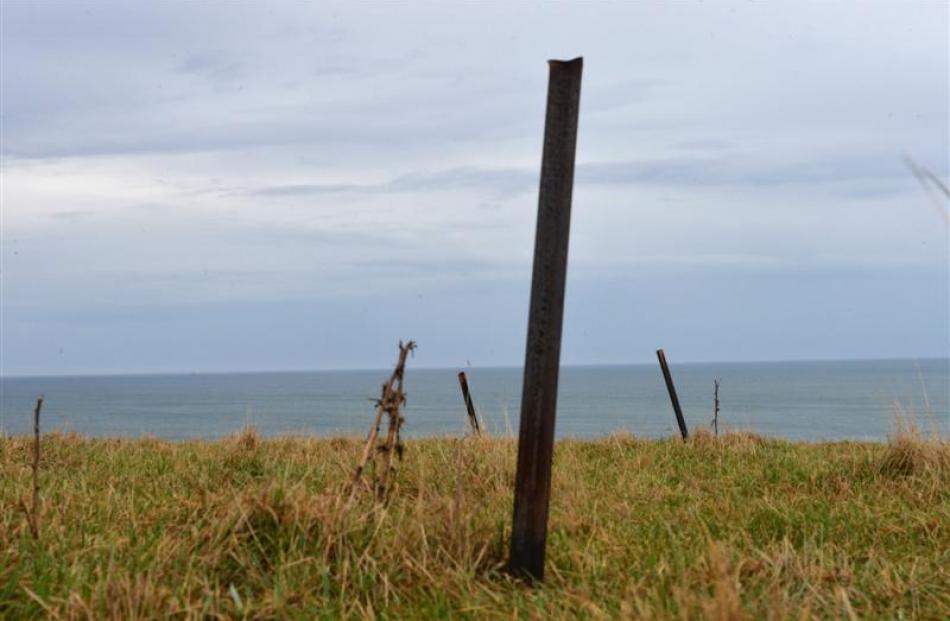 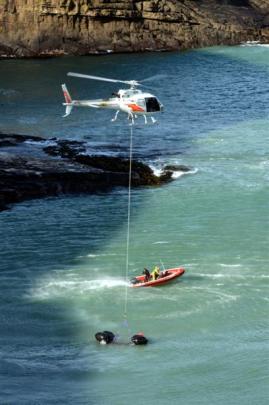 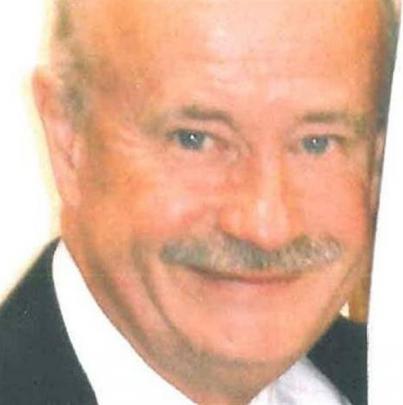 A stake that police believe John Beckenridge used to mark the best spot to drive over a cliff on a grey and windswept Catlins coast may be the last sign of the man and his 11-year-old stepson. Hamish MacLean takes a look at the mystery so far.

The marker stands strong against the bracing southern gales of the South Catlins coast, alongside two others marking tyre tracks headed towards the cliff's edge.

Beyond, over the edge, is an 88m fall to rocks and a raging sea.

It was the perfect spot to vanish without a trace, property owner Paul Watson says. ''If you were to do the job properly and make a specialised job of it, you would have chosen exactly that place.''

This week, six weeks after the vehicle went over the cliff, police recovered it. What is left of John Beckenridge's Volkswagen Touareg - and there is little - is in Invercargill being examined by forensic specialists.

The vehicle is the last piece of solid evidence police have uncovered in a missing persons case that has given up little proof of anything since Mr Beckenridge and his stepson Mike Zhao-Beckenridge disappeared from Mike's school in Invercargill on March 13.

Police have said it would have been ''difficult but not impossible'' to rig the vehicle to drive itself off the cliff, but that all the evidence points to a murder-suicide. Still, nobody knows where the pair are.

• What is known is that Mike recently moved to Invercargill with his mother, leaving Queenstown and Mr Beckenridge behind.

He started a new life and a new school at James Hargest College.

A photo of Mike issued by police shows a calm, contented child.

There are conflicting reports about the family life that Mike and Mr Beckenridge shared at home before Mike and his mother moved south late last year.

Police believe Mike was initially willing to be in the company of his stepfather when the pair went missing.

A neighbour, known only as ''Ant'', called Mr Beckenridge a devoted father who did everything with, and for, Mike. He said Mike was a ''happy wee lad'' when he attended Remarkables Primary School.

But another neighbour told TV3 the family was withdrawn and Mike was not allowed on ''playdates''.

Mr Beckenridge was ''one of those people'' who ''rub you the wrong way'', the neighbour said.

A Family Court judge confirmed a decision was made, after specialist advice, to transfer the care of Mike to his mother ''due to findings that Mike had been alienated in the care of Mr Beckenridge''.

• Mr Beckenridge may have had grievances about the Family Court decision that separated the pair.

In breach of a parenting order, he picked up Mike from his new school at lunchtime on March 13 and disappeared.

The two were believed to be camping, and police issued a wide alert and began to appeal to Mr Beckenridge to contact them directly and assure them they were both OK.

A farmer saw the pair near Slope Point and reported it to the police on March 16, the last confirmed sighting of either the boy or his estranged stepfather.

On March 20, a week after taking Mike, Mr Beckenridge sent text messages from the Catlins area to his neighbour, friends, solicitor and Mike's mother.

Police communications manager Nic Barkley said the tone of those messages was ''goodbye''.

Soon after, Catlins Land Search and Rescue volunteers scouring a wide area along the Catlins coast, from Haldane to Tautuku, turned up some items of interest near Curio Bay.

The boy's backpack was found, as were the tyre marks; an oil slick was spotted on the water and the police national dive team was enlisted in the search.

But the unnamed rocky cove on Mr Watson's Curio Bay farm where the search led police was impenetrable.

The sea was too rough for the divers to enter until this week, when the rusty chassis of the Touareg was hauled from the ocean and on to a boat.

• While there is no evidence of it, Mr Beckenridge's background has spurred speculation the vehicle was driven off the cliff as a red herring.

The 64-year-old is an Australian of Swedish descent with multiple aliases.

Police have declined to talk about his past or why he might have aliases, other than that he has no known criminal convictions.

He lived on Lake Hayes Estate and told people he was a helicopter pilot who, until last year, was based in New Zealand, and worked in Papua New Guinea month-on month-off.

It is not known what company he worked for or what kind of helicopter work he did.

• Mike's mother has remained silent throughout. Police and those close to the family report she continues to hold on to the hope of being reunited with her son.

She was at Curio Bay this week as the vehicle was pulled up from the nearby bay.

It had been, understandably, exceptionally ''hard'' on the family, police who were in contact with Mike's mother said.

They have received and eliminated reports of sightings. None of the alerts they have set to notify them of any movement by the man have been triggered, but they cannot rule out that Mike and Mr Beckenridge are somewhere on the run.

The Volkswagen Touareg might hold the only clues as to what happened to them.

March 18: Police seek help to find the pair, thought to be travelling in a dark-blue Volkswagen Touareg.

March 21: Confirmed sighting of the pair in bush in the Slope Point area in the Catlins.

April 8: Detective Sergeant Mark McCloy says ''all the evidence'' points to the pair being inside Mr Beckenridge's vehicle when it plunged off a cliff.

April 23: Rough seas continue to prevent recovery of the vehicle.

Yesterday: Divers and helicopter recover the vehicle. The vehicle is taken by boat to Bluff.