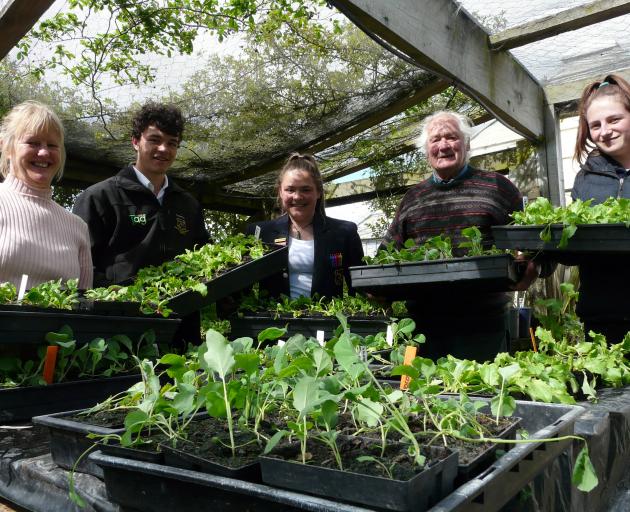 And it is common sense that has helped him draw together community threads into a ''low-key'' scheme helping out Milton locals with affordable, and often free, vegetables to help feed their households.

Also a keen vintage machinery enthusiast - Mr Goldsworthy's collection can be seen opposite the State Highway 1 Raes Junction turn-off to Milton's south - the 85-year-old retired truckie was ''twiddling his thumbs'' about three years ago when he had an idea.

''I thought: I hate to see these tools sitting idle, so what could I do to put them to good use? I know how some families struggle to put good, healthy food on the table nowadays, so I put two and two together and started growing,'' he said.

Employing his favoured ''common sense'' once more, he sought like-minded individuals and groups locally, and soon discovered the town's Tokomairiro High School had a horticulture programme.

''I approached the teacher, Sue [Nelson], and she and these bright sparks have been providing veggie seedlings ever since.''

Before long, others backed the idea, too.

Milton Round Table had purchased a shipping container to store both his tools, and the near 1.5 tonnes of potatoes he grows each year; and Milton community centre the Tokomairiro Hub was providing a distribution outlet, through its regular Tuesday market.

Land on which to grow had been loaned, at no cost, by friends and acquaintances.

By using some ''well-oiled'' vintage agricultural machinery, Mr Goldsworthy said he was able to do ''95%'' of the work himself.

''I'm not doing it for pats on the back. I'd rather be up and active than sitting around; and if we can help a few locals out in the process, so much the better.''

Driven by demand, his veggie stall also operated from a Milton wool store's car park on Tuesdays and Fridays, by gold coin or free of charge, according to need.

The only thing occasionally hindering the scheme, he said, was the weather.

''We've got going now, although it's been a bit wet so far this spring. But with a bit of luck we'll have some nice greens ready for Christmas.''