Ambition of own church huge effort, but worth it 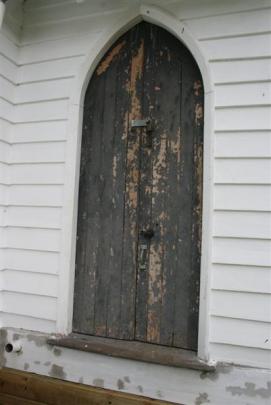 The main door, as yet unable to be accessed. In time a ramp and deck will connect it to ground level. 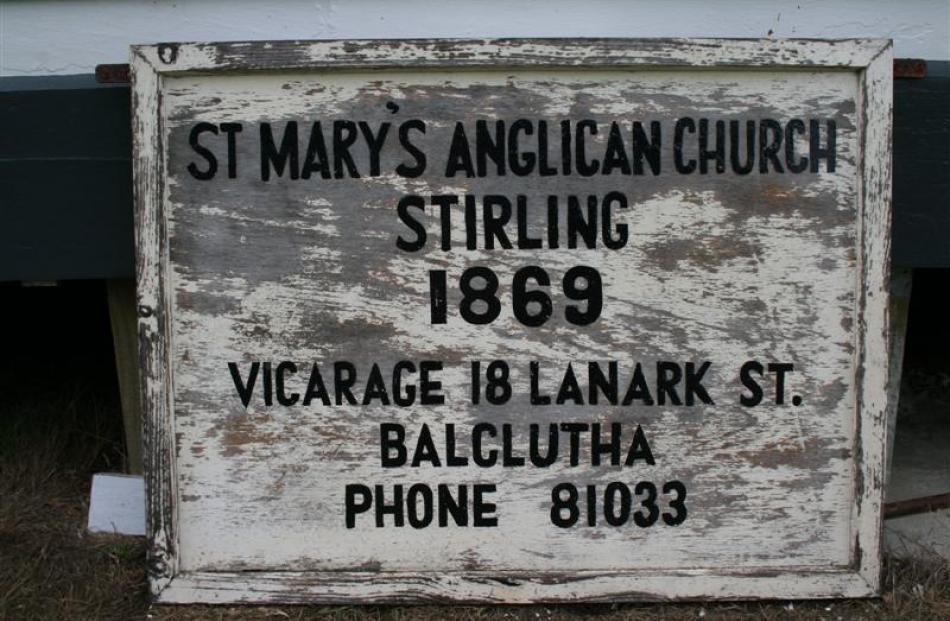 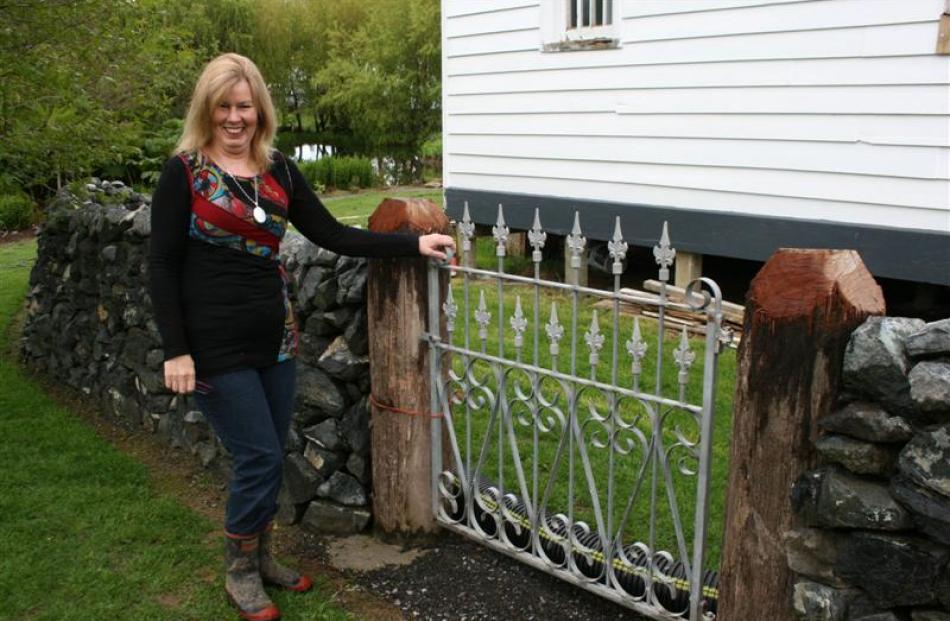 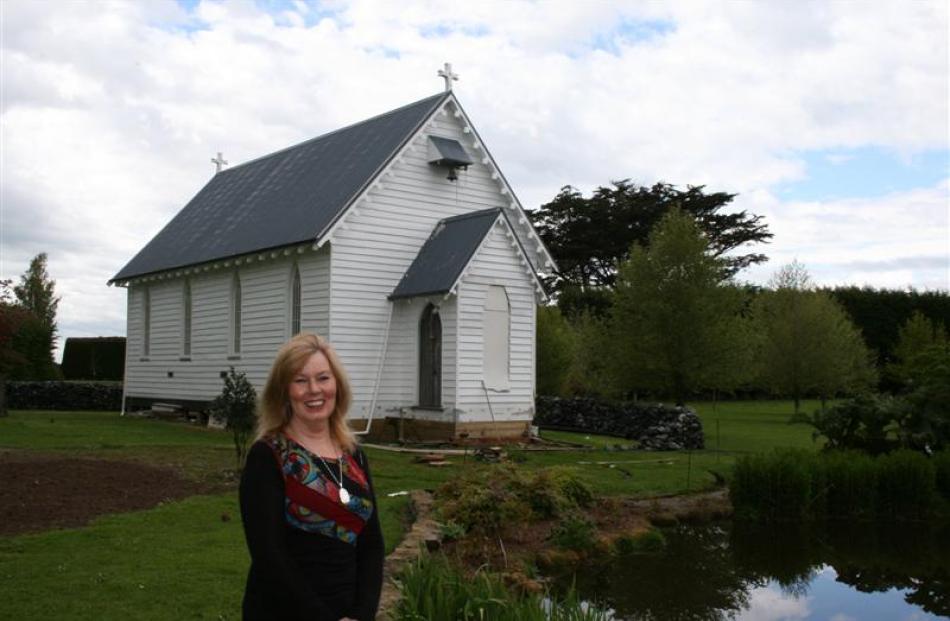 Annie Close is proud of the newly created pond at St Mary's Anglican Church, at Waianiwa, northwest of Invercargill. Photos by Allison Rudd.

Annie Close has wanted her own church since she was a teenager and now she has one. Staff writer Allison Rudd spoke to her about her acquisition and the huge restoration job she and her husband Greg are undertaking.

Annie Close loves her new church so much she plans to have her ashes interred beside it after she dies.

''That's where I'm going,'' she says, pointing to a tree planted by the dry-stone wall her husband Greg is constructing around the building.

The Closes had lived in many houses throughout New Zealand before they bought their property at Waianiwa, northwest of Invercargill, 16 years ago.

''I said when I moved here that I wasn't moving again and they would have to take me out in a box. Now they will have to bring me back again, too.''

The Closes bought the former St Mary's Anglican Church at Stirling, South Otago, in 2006, but Mrs Close says she had wanted a church for more than 30 years.

Her grandmother, ''a staunch Anglican'', ensured her grandchildren attended Sunday school. As a teenager, Mrs Close helped the vicar take services in small rural churches all over South Canterbury.

''Some of the churches were on country stations. I thought: `How fantastic to have a family church'. That's when I decided I would like one too.''

Fast forward to 1996 when the Closes bought a century-old house on 4ha at Waianiwa which they called Argyle Cottage. It was on land which had been surveyed in the 1880s to become the village of Argyle, but the village never went ahead.

They extended and renovated the house and developed almost the entire property into garden.

Couples began to ask if they could get married in the garden, and to cater for them Mr Close built ''The Ruins'', a walled garden area made from concrete recycled from an old cow byre.

The couple kept an eye out for a church and tendered unsuccessfully for several.

Then, in 2006, a relative told them St Mary's Church was on the market.

Built in 1869, the 12m by 6m church had already been moved once. It originally stood at Inch Clutha, a large island in the middle of the Clutha River, downstream from Balclutha. When the community hub moved across the river to Stirling in the early 1900s, the church went too.

It was another five years after their purchase before St Mary's made the 135km journey to Waianiwa. The Closes had been in no hurry. Then when everything was ready to go, staff from the specialist transport company Kings House Removals were busy in Christchurch after the earthquakes.

The move finally happened in November 2011. The windows and vestibule were removed and the main part of the church transported in two pieces - the walls and floor on one truck and the roof on another.

The building was everything Mrs Close wanted. Although tired and in need of plenty of TLC, it was sturdy and came complete with impressive stained glass windows, which had been installed in the 1920s, pews and a bell.

There were surprises. A section of wall below the stained glass windows was removed to reveal the original full size of the windows. The bottom part has now been restored with coloured glass panels.

There was also much work required - new bearers, new window flashings, some replacement weatherboards and a new vestibule outside, and a complete revamp inside.

A garden is also being developed around the church, including a pond, a bridal walk and an azalea garden.

The Closes are doing almost all the work themselves with some help from family, a joiner neighbour, Murray Jordan, and other friends.

Most of the exterior work has been completed and the Closes have started on the interior - removing hardboard and carpet to reveal the original tongue-and-groove floorboards.

The church has the capacity to hold about 100 people. Modern building codes require it to have a second door and access for the disabled. The second door will go in on the south side and a ramp will lead to the main door.

Mrs Close has spent months ''dressing'' the church - buying chalices, candlesticks, more pews and other church-related items online and in second-hand shops, as well as making her own altar clothes and table cloths. Local people who found out she owned a church have also donated church-related items including a christening font and an altar table and chairs.

The renovation project has been time-consuming for the couple, now in their 50s.

Mrs Close works on the property full-time, gardening and looking after visitors to the garden, while Mr Close is a manager with Fonterra in Invercargill.

''We are weekend renovators. Come Monday, we are so stiff and sore we can hardly walk. It's hard work but it is so rewarding,'' Mrs Close says.

The couple hope to have the church renovated by next month in time for the Waianiwa School to hold a church service there as part of its 150th anniversary celebrations. Later, it will be available for weddings and other services.

Mrs Close says she is proud she and her husband have saved a church and restored it.

''There are times when you think you are not getting far, but when you stand back and look how far you have come, it's amazing. I'm not disappointed we took this on - not at all.''