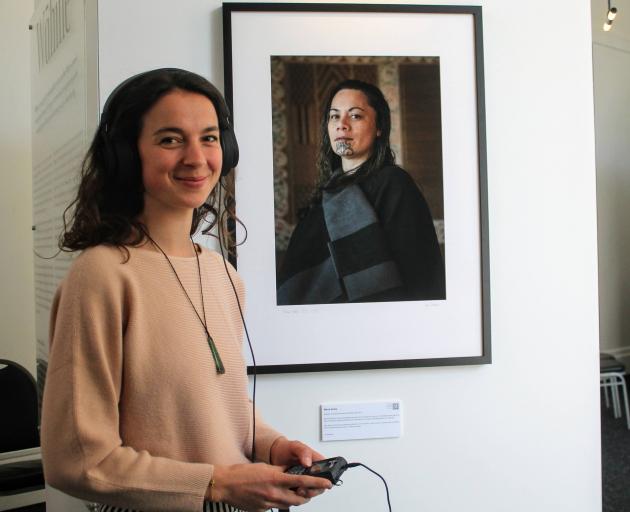 Artist and photographer Loren Pasquier with her portrait of Maria Aroha, of Awarua runanga. PHOTO: LUISA GIRAO
After French artist Loren Pasquier arrived in New Zealand several years ago, she became fascinated by the Maori culture.

However, she also noticed the division between Pakeha and Maori "was quite tangible".

Ms Pasquier then immersed herself in a learning journey about the Maori language, the history and creating connections with the culture.

"I thought quite candidly that perhaps there was something I could do with my skills and my sensitivity."

Ms Pasquier launched her resulting exhibition "Wahine" at the weekend at Miharo, in Invercargill.

The exhibition focuses on the "raw, honest and vulnerable" stories of eight Maori women through personalised sound and portraits.

Local woman Maria Aroha, of Awarua runanga, was one of them.

"In general, being a woman myself, I’m aware that it is less common to have women speaking in public spaces and have their stories told. Having a light shining on them.

"So I thought it could be a great angle," Ms Pasquier said.

"Wahine" was the first chapter of Ms Pasquier’s project The Woven Woman.

She hopes to frame stories of other women in countries such as India and Australia.

"Those women are letting people who they don’t know, totally strangers, to fully come into their lives and I have noticed the power of this vulnerability ...

"It is an instinct [feeling] of love, compassion and respect.

" It made us realise that even [though] we are very different people, we actually have so many experiences in common wherever we are from."

The "Wahine" exhibition will be on display at Miharo until December 12.