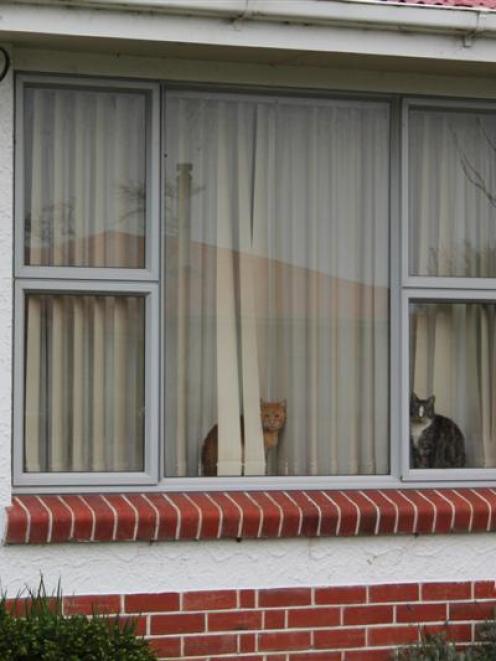 Cats sit on the windowsill at Averil Gardiner's Invercargill home. Photo by Allison Beckham.
The Invercargill woman charged with keeping too many cats on her city property can be named as Averil Maree Gardiner.

Gardiner, who has pleaded not guilty to failing to reduce the number of animals on her property to comply with an Invercargill City Council bylaw, and creating a nuisance under the Health Act, 1956, has been fighting to keep her name private.

Last month, in the Invercargill District Court, Judge Michael Turner ruled she had not met the high threshold required for continued name suppression and ordered it be lifted. Through her counsel, Simon Claver, she immediately appealed to the High Court.

The appeal was to have been heard in Invercargill yesterday, but in the afternoon the court issued a statement saying the action had been abandoned.

She has lived in a quiet North Invercargill street for about two and a-half years and was not at home when the Otago Daily Times visited yesterday. The curtains were drawn and four cats could be seen sitting on window sills.

Fern and Rachael Webber are among many neighbours who have complained about Gardiner's animals roaming the area, upsetting other cats and fouling and spraying on nearby properties.

Mr Webber said after Gardiner moved in, he and his wife did not realise for some months just how many cats she owned.

''Then we began to see them sitting on her driveway in the sun. The most I ever counted was 25.''

Mrs Webber said she did not care if Gardiner owned 10 or 20 cats but was only concerned about the health of her own family.

''The cats were using our entire lawn and garden as a toilet ... and digging up my seedlings.

''Before our children went out to play we had to go round with a plastic bag and pick up the poo.''

Since news of Gardiner's cats broke about three months ago, the cats had been kept inside ''virtually 24/7'', Mr Webber said.

''It's been awesome for us, but what the smell is like inside her house I don't know.''