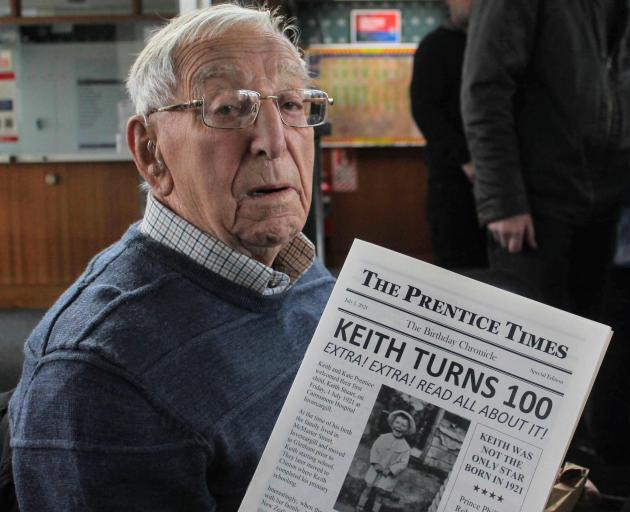 Keith Prentice shows the newspaper made by his family about his life to celebrate his 100th birthday. PHOTO: LUISA GIRAO
Keith Prentice says the secret to longevity is to "live one day at a time".

The Invercargill man celebrated his 100th birthday last week and on Saturday he was the host of an afternoon tea with his family and friends at Bluff Fire Station where he was a volunteer firefighter for years.

When asked how he felt on reaching this milestone, Mr Prentice said: "I’m surprised — that is what I’m feeling."

The family of Mr Prentice prepared a tabloid called The Prentice Times to highlight important moments of his life.

It included his days as an apprentice in Southland, his passion for buying and restoring Indian motorcycles and his career as a firefighter with the Bluff and Tiwai Brigades.

Not long after returning from his military service, Mr Prentice reconnected with a childhood family friend, Myrtle, and they married in 1950.

His wife died in 2019 at Rose Lodge rest-home where the couple had lived in their villa for six years.

The couple had three children, James, Judy and Christine. Mr Prentice now has seven grandchildren and 14 great-grandchildren living throughout New Zealand and Australia.

Daughter Judy Dunick said her father was an inspiration to the family.

"The other day he joked, saying he has raised the bar now for the family.

"It is a very special moment to have everyone here to celebrate him."