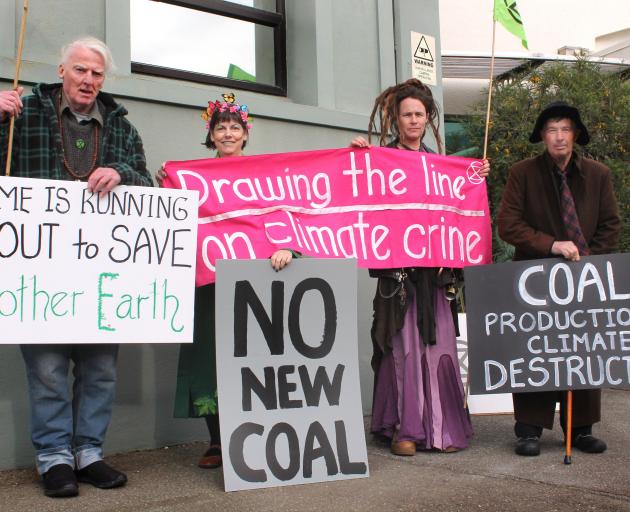 Extinction Rebellion Invercargill members (from left) Patrick Burrowes, Rayleen Carston, Heather Simpson and Alastair Carston protest against the possible expansion of a Southland coal mine. PHOTO: LUISA GIRAO
An Invercargill woman says time is running out to save "Mother Earth" and the potential expansion of a Southland coal mine will make things even worse.

They urged the council to decline a consent application from New Brighton Collieries Ltd, owned by Bathurst Resources Ltd, which could lead to the expansion of the Takitimu Coal Mine near Nightcaps.

The company already holds an exploration permit for land near Ohai, a council forestry block, and if coal was found in the area, it could add three years to the life of the mine.

Extinction Rebellion Invercargill co-ordinator Rayleen Carston said the council should not allow the expansion to happen.

"Extinction Rebellion challenge the council to decline this consent application, with a view to the long-term environmental security of our region, protecting future generations of Southlanders.

"We are running out of time and we can’t let any more CO2 into the air. We just can’t have another coal mine."

Mrs Carston said yesterday’s demonstration would be the first in a series of protests.

"Some things I’m not saying ... I’m not incriminating myself but we have a lot of things down the pipeline with other groups as well."

She asked those in the community who supported the expansion to think long term.

"This is going to end [in eight years] so what will their future be then? They need to look into what is going happen with their children and grandchildren.

"Coal is significantly contributing to climate change, which threatens to push humanity to the brink of existence."