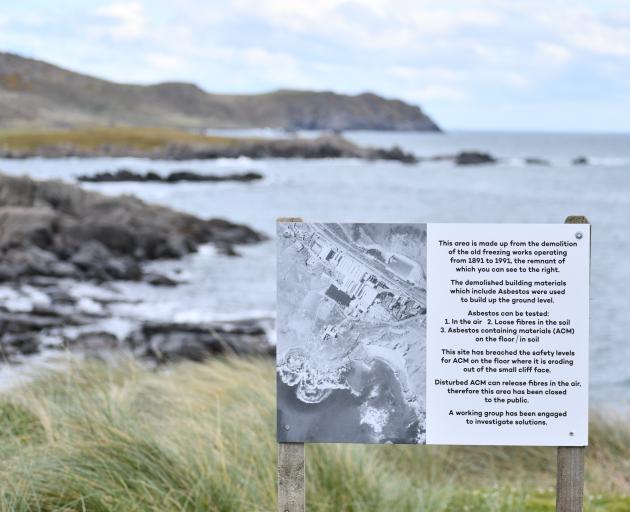 Signs at Ocean Beach in Bluff warn of the presence of asbestos.PHOTO: LAURA SMITH
Eroding landfills are increasingly becoming an issue. Among them is Bluff’s Ocean Beach where contaminants making their way on to the foreshore pose a risk to human health.

An update on the matter has been provided to Environment Southland in an agenda for an upcoming committee meeting.

Catchment integration manager Fiona Young explained landfill risks at Ocean Beach came to light in 2018 when a member of the public reported finding asbestos fragments on the beach behind the former Alliance freezing works.

In October 2019, tenders closed for work to carry out an investigation into the extent of asbestos contamination.

Environment Southland led the project, which was given 50% funding of the estimated $100,000 cost from the Ministry for the Environment’s contaminated sites remediation fund.

Additional costs were to be met by the landowners, including Department of Conservation and the Invercargill City Council.

The initial project was to include an investigation of the site and assessment of remedial options and, in December that year, a specialist team removed some of the asbestos material.

Sampling from the site has shown there is a risk to human health from exposure to heavy metals and asbestos contaminated soil as well as a potential risk to the marine ecology and aquatic organisms.

Ms Young explained officials now had a better understanding and knowledge of the landfill’s history; the site dated back to before 1900 and included the Te Wera village.

The remedial options assessment report considered sustainable remediation of the site and recommended a number of options, the preferred being a combination of waste removal and hard and soft coastal engineering.

Further work was needed to confirm options and costs, including an assessment of climate change and sea-level rise effects.

Ms Young’s update said the ministry approved the report findings and the working group agreed to proceed with further assessments.

This would be managed by Doc and the city council.

Stakeholder and community consultation would be held.

For too long the mindset of burying the toxic has been prevalent. Whether landfill or waterway. To become "someone else's problem" . Lately this has been rate/taxpayer. We need to end this toxic dumping. And hold to account those who are/have been guilty.