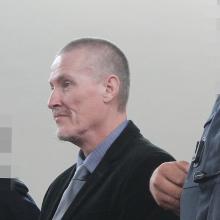 Rodney Stuart Fallowfield. Photo: Luisa Girao
A woman thought she was going to die the day Rodney Fallowfield sat on her and pushed his thumbs into her throat, strangling her until everything went blurry.

The event, which happened about 32 years ago, was one she had not forgotten.

"It’s taken its toll," she said

The woman, who was given name suppression by Justice Jan-Marie Doogue, appeared in the Invercargill High Court via audiovisual link yesterday as a Crown witness in the trial of Fallowfield, who is charged with the murder of Shirley Reedy at the Explorer Motel in Te Anau on May 15 last year.

While Fallowfield admits he strangled Ms Reedy, he is defending the charge on the basis he did not intend to kill her.

When being questioned by Crown counsel Riki Donnelly, the woman said she could not remember what led to the event when she was strangled, but she had been outside on the front lawn when Fallowfield threw her to the ground.

"He sat on top of me and he started strangling me."

She demonstrated to the jurors how he used his thumbs to push into her throat.

"I couldn’t breath and I was thinking, ‘just get it over and done with’."

"I know things were going blurry. I was trying to breath and I thought he was actually going to kill me."

Although she tried to fight him, her attempts were in vain.

She could not remember how long the attack lasted but said it felt like a lifetime.

"Then he let go as I was taking my last breath and he got up and walked inside, like nothing had happened," she said.

There were three small abrasions to his face near his mouth; these appeared to be recent as he could not see signs of healing.

They were likely caused by a scratch or superficial injury, he said.

The scratches on Fallowfield’s hands were made with a force strong enough to open the superficial layer of the skin.

Although Fallowfield appeared tired and low, Dr Hill had no concerns about his physical or mental health when he was examining him.

In cross-examination, counsel Peter Redpath asked if the cut on Fallowfield’s abrasion on his face could have been made by a razor nick while shaving.

"It doesn’t look as if that could come from a razor," Dr Hill replied.

Dr Hill agreed with Mr Redpath the abrasions could have been made by something that was moving.

Mr Redpath also asked if Fallowfield not taking his diabetes medication at the correct time on May 15 was not optimal for him.

A pathologist is expected to give evidence for the Crown today.

The trial is expected to finish early next week after the defence calls its expert witness, a pathologist based in New South Wales.