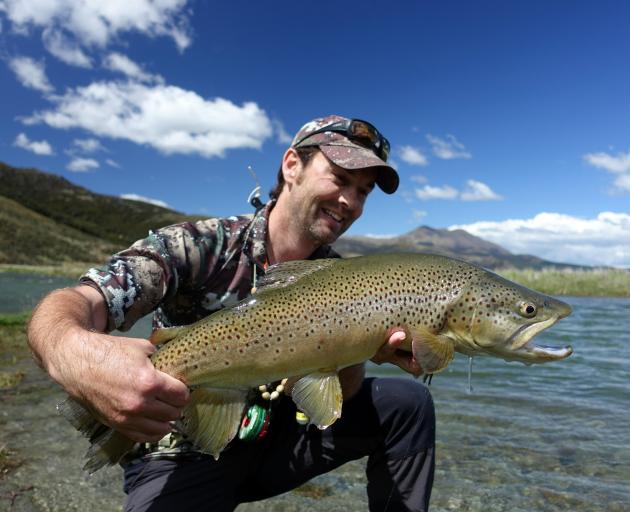 Fish & Game communications officer Hamish Carnachan, from Wellington, with an upper Oreti River treasure, a big brown trout. Photo from Fish & Game.
The Environment Court has ruled in favour of an appeal by Fish & Game Southland against the Oreti River section of stage two of the Around the Mountains Cycle Trail.

Fish & Game is hailing the decision as a ''great outcome'', while Southland District Mayor Gary Tong says he is ''deeply disappointed''.

Fish & Game appealed to the court against an independent commissioner's decision to grant a resource consent to the council for the trail's second stage.

By allowing the appeal, the decision effectively halts consent for work on the trail section.

Mr Tong said the decision was a blow for the communities of Lumsden, Mossburn, Five Rivers, Garston and Athol. The council would need to carefully assess the court's findings before deciding on its next move.

Southland Fish and Game Council chairman Graeme Watson said the decision was not only an excellent outcome for anglers, but for all Southlanders because it saved ''one of the most iconic back country areas''.

The judgement had upheld Fish & Game's case by stating that unmodified rivers were ''limited, finite and highly valuable recreational assets''.

The Mararoa option would be as scenic as the Oreti River valley, as well as being cheaper to build and maintain.

''Not only that, it would be safer and provide better links to Te Anau while at the same time not compromising the overall appeal of the trail.''

The 175km trail will eventually link Kingston and Walter Peak Station, via Northern Southland and back country wilderness in the Mavora area.

But its cost has spiralled to more than $14 million and is likely to climb higher. Earlier this year the council commissioned Deloitte to review the project's financial management.

The report, released in August, found governance and management failures.

Mr Watson said the report identified a lack of expertise in the scoping, design and construction of the trail.

''Had they received competent advice, I believe the council was unlikely to have dogmatically pursued the Oreti option, which has now been found to be entirely inappropriate.