By Elena McPhee
0 Comments
He was lost, alone and nearly 700km from home — but a conservation dog that went missing on Campbell Island is back on the Mainland.

Jack Russell/fox terrier cross Flint was flown to Taieri Airfield late yesterday after he was found and rescued by a crew from Helicopters Otago.

The plucky rodent-catcher was found waiting at Beeman Base, on the other side of the subantarctic island from where he first bolted when startled by a charging sea lion.

He had been muzzled and alone on the island since Wednesday. He was safe and well when he was found — and even happier after wolfing down a rescuer’s pie.

Crew member Ian Ridley said Flint was found almost as soon as the helicopter got to the base. He was there, standing on the hostel’s veranda.

He was "whistled up" using the commands passed on by his handler, Richard Johnston.

"He was pretty happy to see us. He shared a bit of bacon-and-egg pie with us," Mr Ridley said.

"He slept most of the way back, and he got out at the Auckland Islands and had a bit of a walk and a bit of an explore."

It was the second hunt for the pint-sized dog. A seven-hour land and air search of the island’s dense vegetation was thwarted on Wednesday.

Worsening weather and a mechanical issue with the HMNZS Canterbury meant the team of 41 people working on the island had to depart, leaving Flint behind. 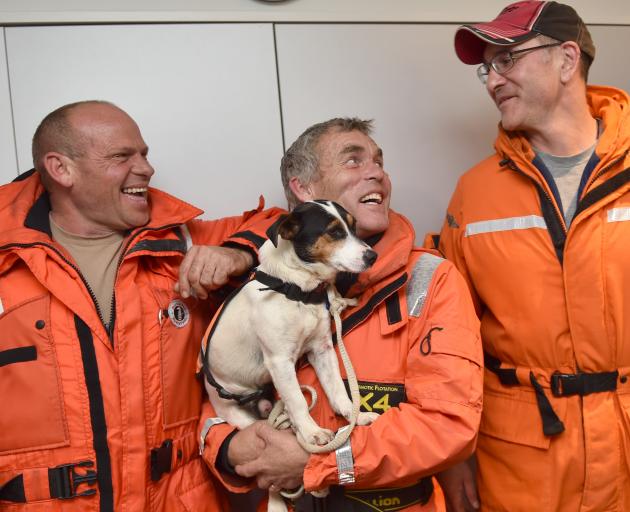 Department of Conservation deputy director-general Mike Slater said finding Flint was a priority: he was considered part of the team and, as he was wearing a muzzle and could not feed himself, it was a time-sensitive mission.

A helicopter crew left Mosgiel shortly after 4am yesterday. They were airborne for a total of about nine and a-half hours.

Doc acting manager of operations for the Murihiku district, John McCarroll, said Flint was one of five conservation dogs working on the island, as part of a collaboration between Doc, the MetService and the New Zealand Defence Force.

He was there to sniff out rats, and was clearly "quite seriously spooked" by the encounter with the sea lion.

The initial search was difficult — even with the help of a helicopter using thermal-imaging technology: "He’s just a wee fella so he was quite hard to track down."

Flint’s handler was still on his way back to the mainland on board Canterbury. He was told about the rescue and was "over-the-moon" Flint was safe.

It took between 12 and 24 months to train a conservation dog. They were a valuable asset, with 91 dogs working throughout the country, some sniffing out rodents, others searching for native species.

At this stage the cost of the rescue was unknown.