Dogs get a sniff of remedy 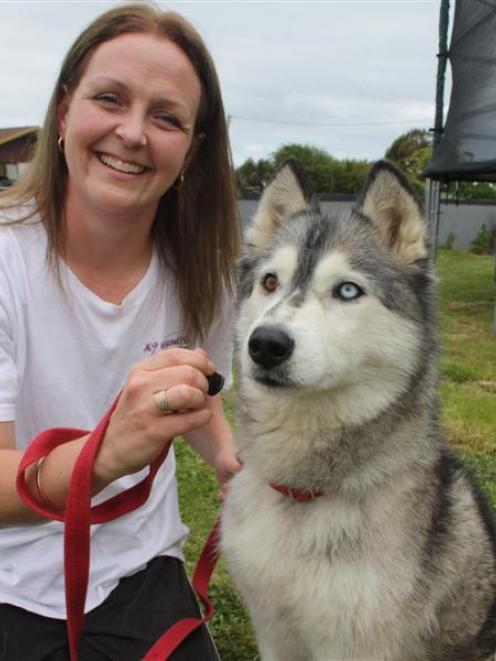 Dog aromatherapist Jo Thomas, of Wallacetown, near Invercargill, prepares to treat her 6-year-old Siberian husky, Dolce. Photo by Allison Rudd.
Dog owners in Christchurch with pets stressed by the earthquakes are turning to an unusual remedy - aromatherapy.

Bottles of the anxiety treatment brewed up by trained aromatherapist Jo Thomas are being snapped up and Christchurch customers now make up about 20% of her business.

Aromatherapy uses essential oils from herbs, flowers and other plants and has been used for centuries to treat humans.

For dogs, a few drops are placed on their chests or their bedding.

The medical profession is divided on how it works - or even if it works - but Mrs.
Thomas, who operates from her home at Wallacetown, near Invercargill, said the proof for post-earthquake Christchurch was relieved dog owners and happier pooches.

''Earthquakes and aftershocks can be pretty traumatic on dogs ... and scared dogs are dangerous dogs,'' she said.

''The biggest thing pet owners tell me is how relieved they are that their pets are finally relaxing and becoming their happier selves.''

The anxiety remedy has also proved popular for soothing car-sick dogs, those with separation anxiety when their owners are away, those which do not like being groomed, are hyperactive, or stressed by shows.

She and her husband, Karl, run a pet care business and also own eight Siberian huskies which they show and run in dog sled competitions.

She became interested in aromatherapy several years ago when their oldest dog, Kayto, became off-colour.

''I had a feeling ... his medications and food might be affecting him and decided to try natural remedies and a natural diet instead.''

She trained overseas and later gained a qualification at New Zealand's only aromatherapy college.

She has developed a range of 12 products, from a flea repellant to a wound healer.

Mr Thomas was initially sceptical aromatherapy would work, until he saw the results at a dog sled competition.

Mr Thomas offered the owner the remedy for a dog which was so stressed it had diarrhoea.

''We gave him the drops and within 45 minutes the diarrhoea had stopped. After more drops ... he dog slept right through the night. That was when I became a convert,'' Mr Thomas said.

Mrs. Thomas said her remedies could not treat barking.

''You need a dog trainer or therapist to deal with that one.''