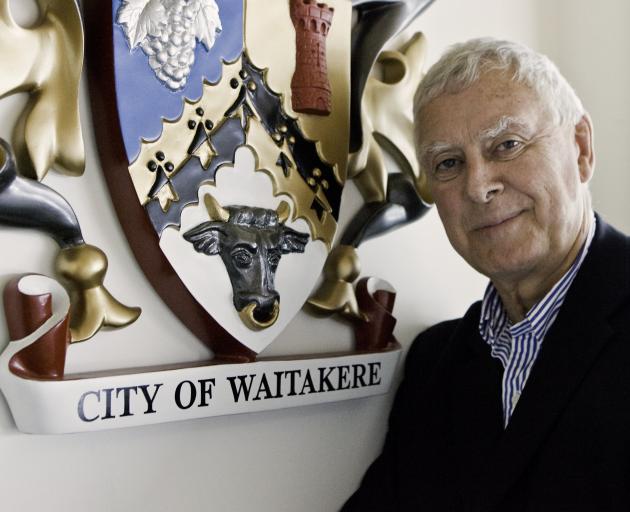 Sir Bob Harvey, who was mayor of Waitākere for 18 years, has offered his services as a mediator in the unfolding turmoil at the council.

This week, tensions boiled over when Sir Tim labelled the organisation a "regime" and claimed that he had been left humiliated by staff going through personal documents.

Sir Bob is pleading with the council to treat Sir Tim’s history with respect - and sort out the disagreement.

"But his lifetime of stuff should be given to the Alexander Turnbull or Waitākere City Library for storage."

Sir Tim has stored personal items across three council-owned sites in Invercargill, but the council could not confirm how long the arrangement had been in place.

The items include furniture, bedding, an appliance in bubble wrap and boxes of documents.

Sir Tim said the documents included minutes, letters and reports accumulated in political life, many of which he claimed were consigned to a skip overseen by Deputy Mayor Nobby Clark.

It is unclear how much of the mayor’s personal history is still stored in council buildings following a March clear-out with Clark, but the deputy believes there are still some items.

Sir Bob said he was saddened by the thought of any of Sir Tim’s history getting binned, and said someone needed to step in to mediate the relationship between the council and mayor.

“Into this big bloody pile go all his minutes [and] letters," he said. "Those kind of things, I believe, are priceless to the longest-serving mayor in this country’s history."

Sir Bob believed there was a way forward for the parties, if they were prepared to negotiate.

He said the mayor and his deputy should be “joined at the hip”, and that issues needed to be sorted behind closed doors because it was a difficult situation for both parties.

“I would gladly mediate for Tim and the council, if invited. I think that’s what is needed is a mediator.

“I feel very sad [about] what is happening. And sadder by the day that there’s a vote of no-confidence in the air. That should not happen to any city or mayor.”

On Tuesday, Clark indicated a vote of no-confidence could be in the pipeline. The following day, Sir Tim accused his councillors of bullying.

Council chief executive Clare Hadley said staff had not been involved in sorting through the mayor’s possessions, but did not wish to comment further.

A six-month progress review against the recommendations of the Thomson Report is expected within the next two weeks.

The report was a damning independent review of the Invercargill City Council, released in October last year.

It highlighted a "leadership void" with Sir Tim at the helm, and strained relationships between the mayor, deputy and chief executive.