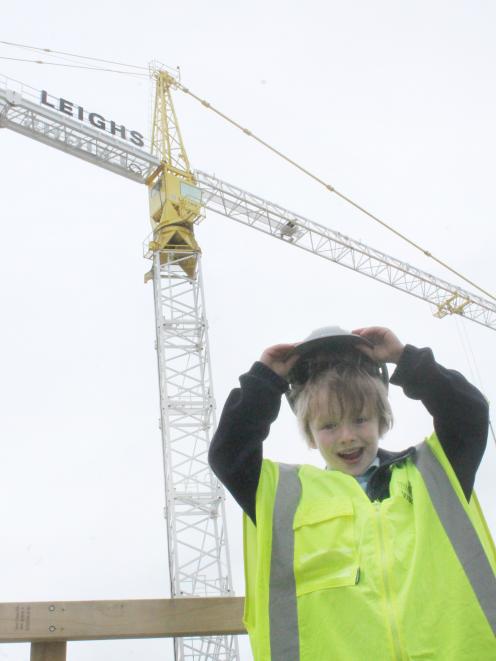 Newfield Park School pupil Harley Coutts (6) is thrilled to have won a competition to name a large crane that will be a part of Invercargill’s skyline for the next year. PHOTO: LUISA GIRAO
He is just a wee boy, but Harley Coutts has already left a mark on his hometown.

The 6-year-old Newfield Park School pupil, from Invercargill, won a competition to name a 43m-crane being used over the next year to build a new hotel in the city centre.

The name he chose was "Lofty the Yellow Lifter".

When asked why, he replied "it is yellow and lifts stuff".

Invercargill youngsters were given the chance to stamp their mark on the crane with a "Name the Crane" competition run by the ILT and Leighs Construction.

The towering machine, which can lift up to 12 tonnes, was installed in February for the construction of The Langlands hotel at the intersection of Don and Dee Sts.

The name "Lofty the Yellow Lifter" will now appear on the crane’s cab and Harley will have the kudos of his own name featuring on site fencing at the inner-city location.

Harley found out he was the winner early this week when his parents drove him to the site and told him the news.

His mother, Samantha Brett, said he was very happy.

"He told his friends at school that he was famous, but they said he was not. But his teacher said he was. He is very happy. He loves trucks and those things."

Harley said he could not wait to see the name on the crane — but he was even more excited to receive an iPad as a prize for winning the competition.