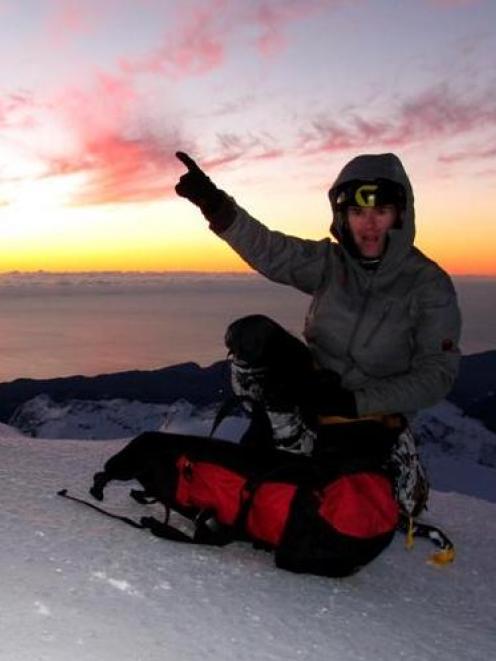 Guy McKinnon on top of Mt Tutoko. Photo supplied.
Part of a Fiordland mountain climbed only once before and labelled a coveted route by climbing enthusiasts has been conquered in treacherous winter conditions by solo climber Guy McKinnon, of Christchurch.

Over three days, Mr McKinnon (37) climbed the 2000m west face of Mt Tutoko in the Darran Mountains last week, reaching the summit at 5.45pm on Thursday.

Downplaying his achievement yesterday, Mr McKinnon said the climb was not something he had prepared for.

But with 20 years' climbing experience and two unsuccessful attempts on the face under his belt, he knew what he was in for.

He attempted the climb in 2011 but it was ''a bit big and scary''. He tried again last year but the weather conditions were not good enough.

Even before the first attempt, conquering the mountain lingered in his mind.

''I guess what I'm good at doing is climbing big traditional mountain routes and this was one of the best big mountains in New Zealand.''

For this attempt he had clear, calm conditions but was forced to spend a sleepless night bivouacked near the summit in freezing conditions followed by a 21-hour walk out.

The first and last time the face was conquered was in the summer of 1974 by Dave Bouchier, Butch Hill and Pete Moore.

''But it was unclimbed for so long 'cause it's so cold,'' Mr Newton said. Mr McKinnon was unique in that he did all his climbing solo and was renowned for it, even though it was dangerous, he said.

''He's very humble and does not seek the limelight, hence his extraordinary achievements often fly under the radar.''

In 2010 Mr McKinnon became the first person to make solo ascents of all 34 of New Zealand's 3000m mountains.

He described Mr McKinnon's ascent of Mt Tutoko ''simply incredible'' and said he did not think it would be repeated in a hurry.

''It's such a coveted route [but] certainly there won't be queues.

''If people were capable of doing it or thought they were, they would have been doing it.''