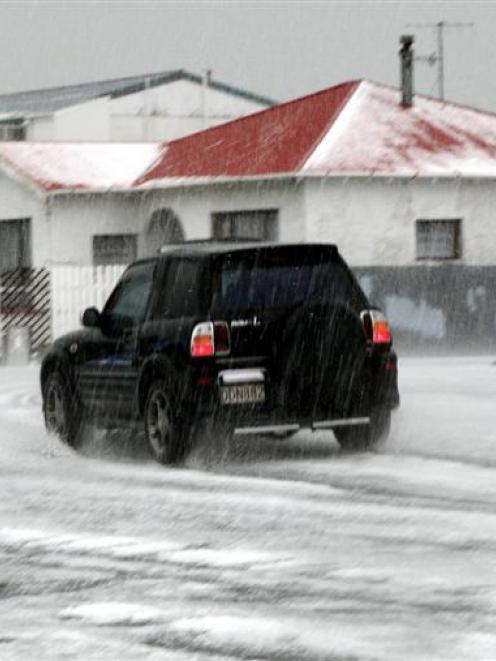 Invercargill summer . . . Hail covers the road in Invercargill during a storm that sent pedestrians scurrying, and flooded buildings yesterday. Photo by NZPA
Invercargill was battered yesterday by what an emergency service official described as one of the worst hailstorms the city has experienced.

The storm, which struck just before 2pm, sent pedestrians running for cover and flooded homes and businesses. The Fire Service received 38 callouts for flooding in 45 minutes.

Fire Service Southland area manager Brendan Nally said volunteer and off-duty staff were brought in to cope.
Buildings, including some large commercial premises, were flooded across the city.

‘‘I wouldn't be surprised if it was one of the worst ones we've had. There'll be a few insurance claims,'' Mr Nally said.

Invercargill department store H & J Smith Ltd cleared customers from the premises and locked the doors about 2.35pm while staff worked to mop up water on both floors of the building.

It was too early to say how much damage the hailstorm had caused, and chief executive John Green was waiting until the building and products dried out to make a further assessment.

Invercargill resident June Thomas was shopping in The Warehouse in Leven St, central Invercargill, when the hailstorm struck. Staff were running around with buckets trying to catch water pouring into the building, she said.

‘‘It was quite frightening. The noise of the hail hitting the tin roof was deafening.''

MetService spokesman Bob McDavitt said the storm hit Riverton, about 40km northwest of Invercargill, about 1.45pm and moved east. It would have taken about an hour to cross the city. The brunt of the storm would have lasted about 10-15 minutes in each area as it passed over.

MetService measured 5mm-8mm diameter hailstones, and 7.6mm of rain in an hour at Invercargill Airport. The thunderstorm dropped the temperature from 15degC to 8degC, Mr McDavitt said.

About 1500 lightning strikes were recorded in the four hours it took the storm to pass, 500 of which would have been at sea.

The storm passed the south of the Catlins area before moving offshore.

A rainstorm that hit Dunedin in the early evening was a different storm, though from the same air mass, a MetService spokesman said. Dunedin received 23mm of rain between 7pm and 8pm.