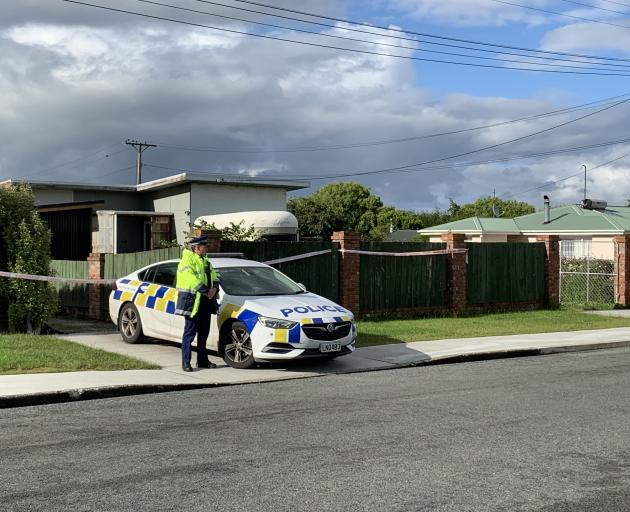 A cordon remains in place at the property on Oreti St this morning. Photo: Abbey Palmer

A man has been charged with murder over the death of an Invercargill man last night.

The 30-year-old man, who has interim name suppression, appeared at Invercargill District Court this afternoon.

It was alleged the accused used a knife to kill a man in the southern city yesterday.

The defence counsel did not apply for bail and Judge Mark Callaghan remanded the accused until his next court appearance on January 21.

A homicide investigation into the circumstances of the death is ongoing.

Detective Senior Sergeant Stu Harvey yesterday said the body of a man was located at a property on Oreti Street about 8.40pm.

A woman who has lived in the area for about three years told the Otago Daily Times today she had felt ''pretty'' safe in the area up until now.

"We usually take the kids bikes up and down the street and teach them how to ride them.''

On Saturday, she let her 11-year-old fetch supplies from the local shop for the first time.

"I had to tell her this morning she won't be doing that again, not until we know what's going on.''

She hoped the death was an isolated incident and would not put residents of the street in danger.

Cordons were put in place overnight and enquiries were under way, Det Snr Sgt Harvey said.

The property remained cordoned off this morning and two police cars were at the scene as well as an officer standing guard.