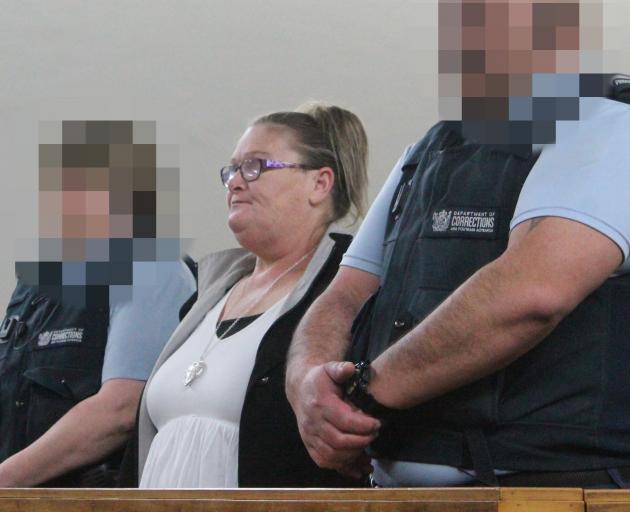 Patricia Samson
The mother of the murderer of Azalia Wilson was woken in the middle of the night of the crime with a request to babysit his daughter — and she did not think it was strange, a court has heard.

Patricia Elizabeth Samson (53) is the mother of Samuel Samson, who was in March found guilty of murdering Ms Wilson on November 17, 2019 at the Bavarian Motel in Invercargill.

She was found with 4-month-old Kiara, daughter of Samuel Samson and Ms Wilson, when she was stopped by the police the day after the murder.

Patricia Samson appeared yesterday before Justice Gerald Nation in the High Court at Invercargill, where she denied a charge of attempting to defeat the course of justice.

In his opening address, Crown prosecutor Mike Brownlie said after receiving a call from her son, Samson went to the hotel where Ms Wilson was killed to pick up Samuel Samson and Kiara.

She then allegedly helped him collect items which would tie him to the crime and together they disposed of the items at the Oreti River, near Fosbender Park, he said.

The items included a bassinet, belongings of Ms Wilson’s and a knife which the Crown believed was used to kill the young mother.

Mr Brownlie said the location of Patricia Samson’s mobile, CCTV footage and a phone records would help the Crown’s case.

"She was part of this because she knew a police investigation was inevitable ...

"The Crown says she knew her son had killed Azalia or at least knew Azalia was in the process of dying."

Counsel David Slater addressed the jurors briefly and said the main question was if his client really disposed of evidence in the river.

He asked them to focus only on this matter and rely on the statements presented at trial.

told the jurors that about noon on November 17, he stopped Patricia Samson’s car — where baby Kiara was — and told her of Ms Wilson’s death.

"She indicated she was not aware that Azalia Wilson was deceased ... She gave the appearance she was shocked by this news and had no idea this occurred."

She became emotional and started to cry.

Detective Paula Owen read statements from the accused to the police at the time of her son’s crime.

She said her son called her in the middle of the night, asking if she could take care of the baby until lunchtime the next day.

"He said they were away to Nightcaps, as much as it sounded strange, it is not for Sam and Azalia," the statement read.

Her son brought the baby alone, she said.

After he fled police, Patricia Samson allegedly heard back from him a few days later.

She heard rumours her son had committed suicide, her statement read.

She drove to Tuatapere, where her son was, and drove back to Invercargill, where he handed himself in.