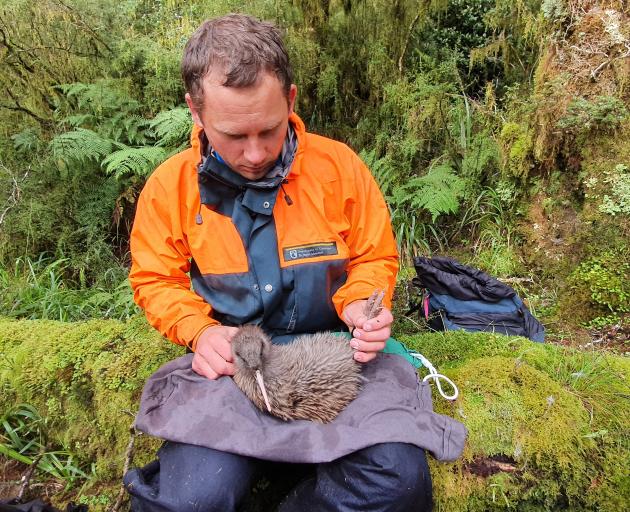 The Department of Conservation’s Troy Watson holds the first chick to reach stoat-safe weight in the southern Fiordland tokoeka kiwi chick survivability project at Shy Lake. PHOTO: TIM RAEMAEKERS
The first 1080 aerial poison drop over parts of Fiordland last winter has resulted in the first kiwi chicks reaching a stoat-safe weight and ensuring the future of the species for now, a ranger says.

Department of Conservation ranger Tim Raemaekers has been managing the five-year southern Fiordland tokoeka kiwi chick survivability project at Shy Lake, between Wet Jacket Arm and Breaksea Sound, since it began in 2017.

In first three years of the project, 34 kiwi chicks hatched but none had managed to survive past a few weeks old, nearly all having been killed by stoats.

In June last year, the Department of Conservation conducted a 1080 aerial poison drop over 40,000ha in southwest Fiordland, including the 500ha project site.

Over the past breeding season 11 kiwi chicks hatched in the monitored area, but only three have survived.

Two have reached the target 1kg in weight but the third was born in February and was still vulnerable to stoat predation.

Mr Raemaekers said they had a good start to the breeding season and did not see any stoats on the trail nest cameras but in late October some of the chicks were taken by stoats and died from natural causes.

"It is difficult to say for sure whether a few stoats survived the 1080 drop or invaded from outside the drop area, my hunch was there was only one or two, but stoats are very good at finding kiwi chicks."

Mr Raemaekers said a 30% survival rate expanded out over the 1080 drop site was enough to stabilise and slightly grow the population over the next four to five years.

He said the third chick would probably reach its 1kg target weight by August.

"When we checked it in April it was 370g which is where it should be, it is a cute fluff ball that one, and we have high hopes for it."

He said the first monitored kiwi pairs this breeding season would probably start nesting in July and hatch their first egg in September.

There were no plans to conduct another 1080 drop in Fiordland as there was good evidence of native birds surviving the year following a drop, he said.

"They have a fighting chance now, we are achieving conservation and that is what we are here to do," Mr Raemaekers said.