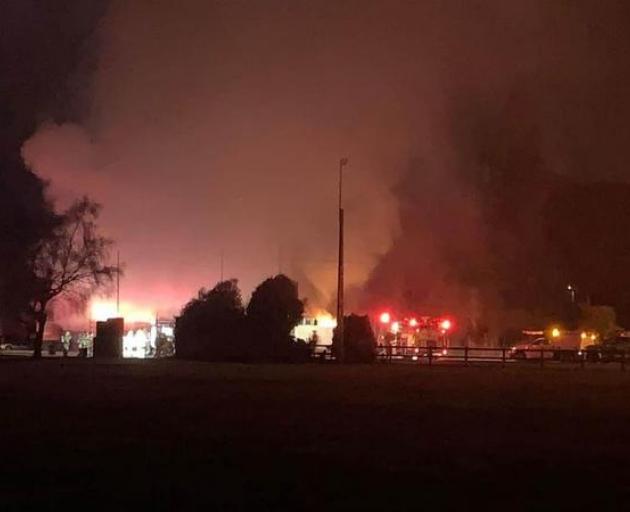 More than 35 firefighters fought the biggest fire in the township for more than 10 years after being alerted about 8.30pm on Friday.

"Our thoughts are with the friendly team from the Mossburn Diner," the message said.

Mossburn Chief Fire Officer Lance Hellewell said the Devon St fire had been fought by four volunteer brigades and was a fine collaborative effort, but the building had been "well involved" when firefighters arrived.

"It’s what we’ve been trained for," he added.

Mr Hellewell, who is also the Northern Southland Community Board deputy chairman, said the diner had long been a significant part of the community and, although there were other cafes, it was the only source of convenience store groceries for the township, and was a valuable employer.

It would also mean a 20-minute drive to Lumsden for groceries.

"It’s not devastating but it will hurt the community," he said.

He was sure the close-knit community would rally round to support the business owner and staff.

Mossburn Deputy Chief Officer David Stalker, who headed the initial firefighting effort, said a neighbour with a deep freeze had volunteered to safeguard fish and other food which had been preserved in a freezing area at the store complex and had been unaffected by the fire.

This had been the biggest fire he had attended and firefighters had been at the scene from about 8.30pm on Friday until after 2am on Saturday, after checking with a thermal imaging camera to find any hot spots.

The fire had not broken through the roof but was burning fiercely inside and generating a great deal of smoke, he said.

"I don’t think it ever went through the roof but the whole inside of the house was just going for it."