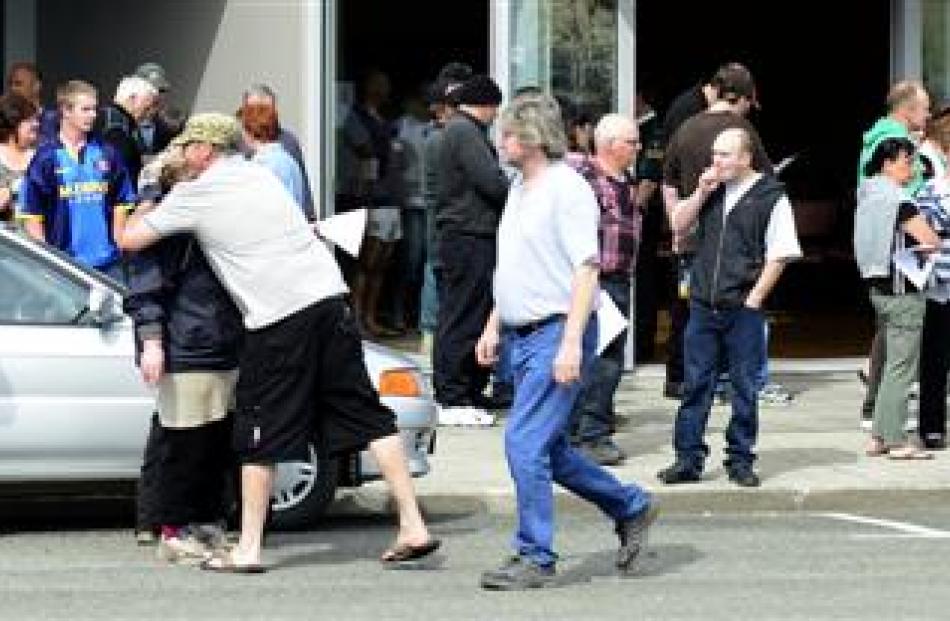 Alliance Group meatworkers spill on to the street outside the Mataura Community Centre yesterday after learning sheep processing will shift to its Lorneville plant, near Invercargill. 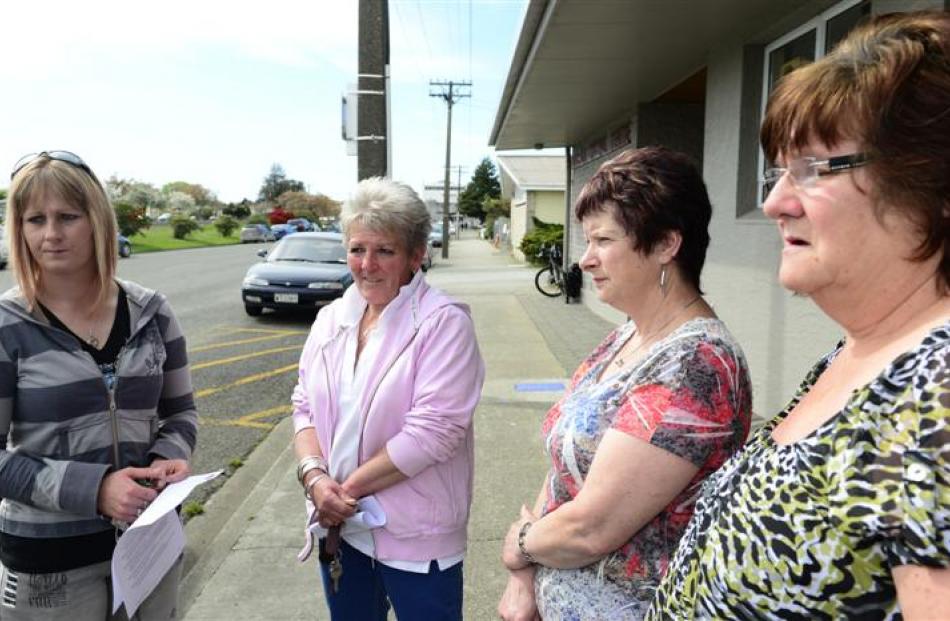 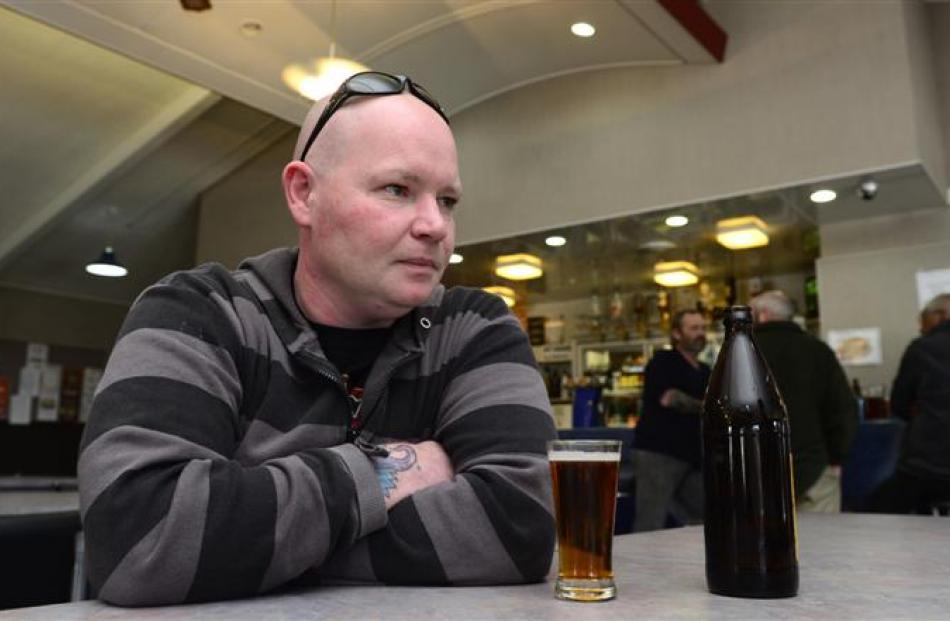 Corey Bryan, of Gore, who has worked at the Mataura plant for 13 years in the boning room, waiting for the news to sink in. Photos by Peter McIntosh.

Mataura's future is uncertain after the township's biggest employer announced plans to shift its sheep processing from the Alliance Group's plant, affecting 325 jobs.

Yesterday, Alliance announced a proposal to move its sheep processing facility from Mataura, near Gore, to the company's sister Southland plant at Lorneville, near Invercargill.

Two-hundred-and-sixty sheep meatworkers will be offered the opportunity to shift to Lorneville, but the future of 65 management, supervisors, engineers and administrators at Mataura is less certain.

Beef processing at Mataura is not affected by the proposal.

Chief executive Grant Cuff said the changes were driven by declining sheep and lamb numbers in the South, and the reality there was too much processing capacity for the available stock.

"It has become increasingly clear the future of Mataura plant is as a beef processing plant."

He said the company was now in a month-long consultation process with workers and their unions, but if the proposal was confirmed, sheep and lamb processing would stop from November.

When asked if workers at other Alliance plants should be concerned, Mr Cuff said the company was always looking at the capacity of each of its plants.

Gore Mayor Tracy Hicks said the district would have to brace itself for the significant effects the proposal would have on all sectors of the community which would be felt for a long time.

"I think Mataura was pretty much built around the freezing works." Mr Hicks said yesterday's announcement was "a bit like a kick in the teeth".

"I'm absolutely gutted for the workers and for the plant management at Mataura." Plant management, staff and the union had worked hard during the past few years to make the plant, which had operated in the town since the late 1800s, as efficient and sustainable as they could, Mr Hicks said.

"And I believe they are doing a very good job," he said.

Mr Hicks had discussions with Alliance Group chairman Owen Poole and management yesterday, and was assured the co-operative would take seriously proposals put forward by staff during the consultation period.

Mataura Taskforce chairwoman Laurel Turnbull said the news was disappointing as staff had worked hard to keep their jobs and last season took pay cuts to ensure its viability.

"It's just another blow for the whole area and it will possibly affect Gore more than Mataura," Mrs Turnbull said.

The task force had been working on stimulating economic and social growth in the town, but the proposal would set those plans back, she said. "Who's going to want to move to Mataura and start up a business?

" Not only would the business sector feel the brunt of the downgrading of the plant but the real estate market might also plummet, she said. "And who's going to want to buy the houses?"

Mataura Community Board chairman Alan Taylor said even if the plant's staff took job offers about 60km away at Lorneville, it would take people out of the district.

Meatworker Aaron Fitzgerald, of Gore, said his grandfather, father, and uncle lost their jobs at Burnside when it closed in 1988.

"Now I'm losing my job. So much for the family business. Alliance has just screwed Mataura."

Mr Fitzgerald said he knew of a young couple who recently bought a house in Mataura, had a large mortgage to pay, a young child, and now both their jobs were on the line.

"I really feel for the young ones. Some will be struggling to feed their young ones."

"These people in Mataura have made sacrifices over the years. This has hit most workers hard."

Mr Davis said the Government needed to step in and "do something" with the industry as there were too many meat plants for the numbers of stock to be processed.

Corey Bryan (37) has worked in the boning room for the past 13 years, and said the news had not sunk in yet.

"You always expect the worst with these kinds of meetings, and I guess we're all in the same boat now."

The Mataura proposal is the biggest blow to Eastern Southland in a long time, Clutha/Southland MP Bill English says.

"I just feel awful about it. On the one hand, it's not a surprise, but on the other hand, it's 300 jobs," Mr English said yesterday. "It's just the size of the impact of it."

The proposed changes not only affected the workers. Their families would also bear the brunt of the end of mutton processing, Mr English said.

There may be further bad news for Southland next week when a final decision on the number of redundancies at the Tiwai Point aluminium smelter is expected to be announced.

On September 5, New Zealand Aluminium Smelters, which owns the Bluff facility, started consultation on a proposal to cut 100 jobs by the end of the year.

In addition to 35 jobs lost through natural attrition, a further 65 redundancies were expected.

Engineering, Manufacturing and Printing Union Southland organiser Trevor Hobbs said consultation ended on September 30 and he expected the company to announce a final decision next week.

Alliance Group
• Invercargill-based Alliance Group is New Zealand's 25th largest company, with turnover for 2011 financial year of $1.5 billion.
• It operates eight plants: Lorneville, Makarewa (near Invercargill), Mataura, Pukeuri (Oamaru), Smithfield (Timaru), Nelson, Levin and Dannevirke.
• It employs 5200 people at the peak of the season.
• Handles 30% of New Zealand's sheep and lamb processing, 10% of cattle and 25% of deer.
• Exports 90% of output to more than 60 countries.