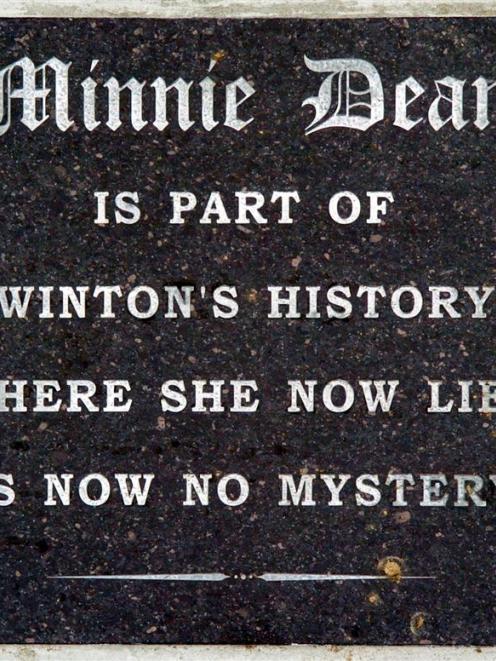 While legend had it that grass never grows on the Block VIII Plot 2 at Winton Cemetery where Dean is buried, the site has a full crop of grass and its own unauthorised gravestone.

The recently installed gravestone was discovered yesterday by Otago Daily Times photographer Gerard O'Brien, who was in the town on assignment.

In December, it was reported the great-great nephew of Minnie Dean wished to erect a gravestone on her unmarked grave - 113 years after she was sentenced to death.

Martin McCrae, a gardener from Stirling in Scotland, wrote to the Winton Community Board in late November informing them he was preparing a headstone for his great-great aunt.

The gravestone was expected to be inscribed with Dean's maiden name, McCulloch, (in line with Scottish tradition) and to read: "To the memory of Charles Dean 1836-1908 and his wife Williamina McCulloch 1844-1895. Rest in Peace".

But the new gravestone has confounded the Dunedin-based author of Minnie Dean: Her Life and Crimes (1994), Lynley Hood.

"I am gobsmacked," she said.

Dr Hood kept in regular contact with Mr McCrae and said the most recent development "is another example that Minnie Dean just won't lie down".

"It would have been nice to have a very simple and respectful ceremony with the unveiling of the real headstone to show that she was a real person and to allow her some dignity."

Previous attempts to mark Dean's grave had been turned down by the local community board and "the town would be rather known as a prosperous farming town than the home of Minnie Dean".

The motive for the new headstone was unclear, she said.

"It is clear it is someone who knows a headstone had been commissioned [to carve it]."

Several Winton locals said when contacted they were puzzled to hear a different gravestone had been installed.

Calls to Winton Community Board chairman John McHugh were not returned yesterday.

Historic Cemeteries Conservation Trust of New Zealand chairman Stewart Harvey, of Dunedin, said the right to place a headstone lay with the family.

"This sounds very unusual," he said.

Believed to have arrived in New Zealand in the 1860s.

Falling on hard times, the couple took up "babyfarming" - looking after unwanted children for money. Two babies' remains were found buried in her garden, along with a skeleton of an older boy.

She was hanged in Invercargill jail on August 12, 1895, the only woman to have been hanged in New Zealand.