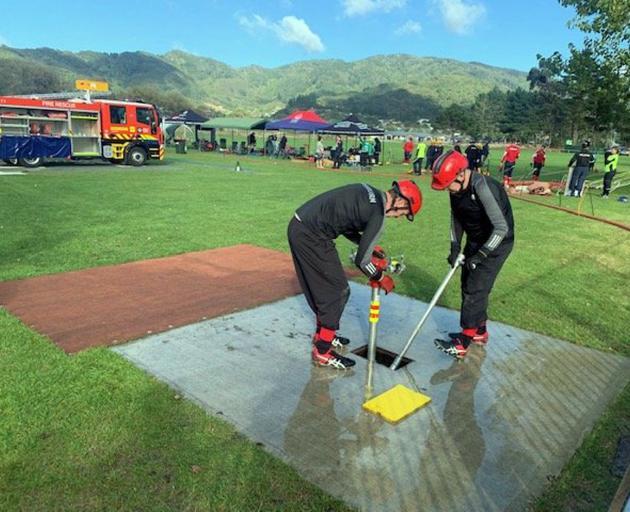 But Mossburn volunteer firefighters Jeff Manson and Stephen Trusler, who have 64 years’ combined experience in their brigade, have walked away from a national competition on top of the world.

It was their sixth year competing together in the United Fire Brigades’ Association (UFBA) National Waterway Challenge, which was held in Wainuiomata at the weekend.

A test of skill, it consisted of several different scenarios of simulated firefighting, where appliance hoses were used by running them out of a man-made dam or fire hydrant.

Mr Manson said he and Mr Trusler competed in six events on Friday and Saturday, which required them to beat the clock by shooting a dish with their fire hose once they had completed each task.

The biggest challenge was consistency.

"No matter how fast you can run with your hose, you have to have skill."

Mr Manson has been a member of the Mossburn brigade for 35 years and Mr Trusler a member for 29. Despite decades of career experience, the pair owed their second place spot to preparing three nights a week in the months before the big event, Mr Manson said.

"It takes a hell of a lot of training.

"We would take an appliance down to our own track in Mossburn [and practise]."

The top South Island duo went head to head with another two-person team from Havelock North, finishing with a total of 159 points, one point away from the winning spot.

While there was no doubt they experienced disappointment, they were just happy to come away with second place, and five trophies, Mr Manson said.

"We’ve never got that close to winning before.

"I’m just grateful to the UFBA for making it happen for us ... to Stephen and also my wife Jan, who’s been at every competition."

A family affair, the men usually competed against their sons — a testament to their ability.

"The camaraderie and the friendship is second to none. We’ve made friends all over New Zealand."

The challenge allowed firefighters to hone their skills and every firefighter was welcome to give it a go.