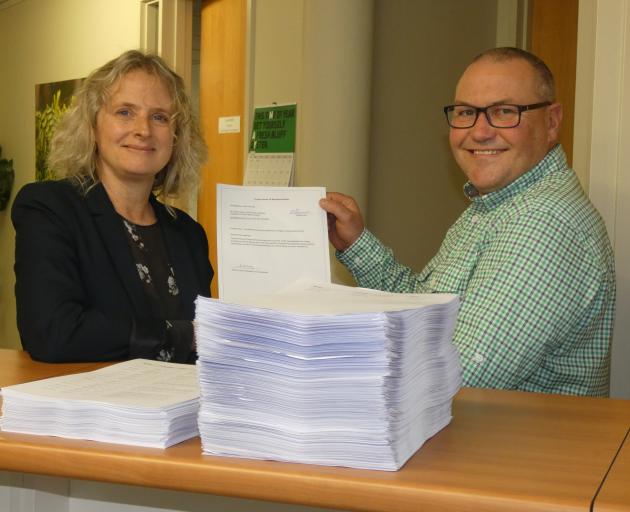 Labour MP Dr Liz Craig is presented with a petition submission from Karl Thomas yesterday in Invercargill. The petition contains 88,000 signatures from across New Zealand campaigning for more consistent sentencing in animal abuse cases. PHOTO: ABBEY PALMER
A petition with more than 88,000 signatures urging judges to implement more consistent sentencing for animal abusers is on its way to Parliament.

Dr Craig agreed to present the petition to Parliament next week.

She said once the petition was submitted, it would then be allocated to a select committee to consider the next steps.

"I'm really happy to accept Karl's petition. It's one of the key roles as an MP and a really important part of democracy for people to be able to raise their issues in Parliament.''

Mr Thomas originally started the petition with campaign website Change.org, to call for a "realistic'' sentence on a case where a 5-month-old puppy was hit over the head with a hammer in Kaikohe, near Whangarei in July 2017.

While the incident was not close to home, he felt it raised serious questions.

The offender received two years and five months in jail, while offenders involved in similar cases had only been charged with minimal home detention, a one-off fine, or were disqualified from owning a dog for a period of time.

"For some reason, this particular event changed me from being a person who read the stories and talked about how things needed to change, to a person motivated to seek change.''

The petition gained traction fast with about 40,000 signatures online in a matter of weeks.

However, the offender's sentencing took place a lot sooner than police had expected, so Mr Thomas altered the purpose of the petition to campaign for consistent sentencing in the hopes it would provide a long-term deterrent to offending.

With the help of the staff from Change.org, the petition grew to 88,213 supporters before it closed on March 19.

Mr Thomas said he wanted to see a mandate introduced and passed down to judges to provide them with guidance on what was expected when sentencing animal abuse cases.

"Our country's record of animal abuse is something every New Zealander should be ashamed of - you just need to read the SPCA's annual list of shame to see how bad it has become.

"If we can gain consistency of sentencing now, there are numerous organisations looking for increases in penalties to bring us up in line with other parts of the world.''

He said he was confident this would encourage better enforcement of penalties and deter people from offending in the future.