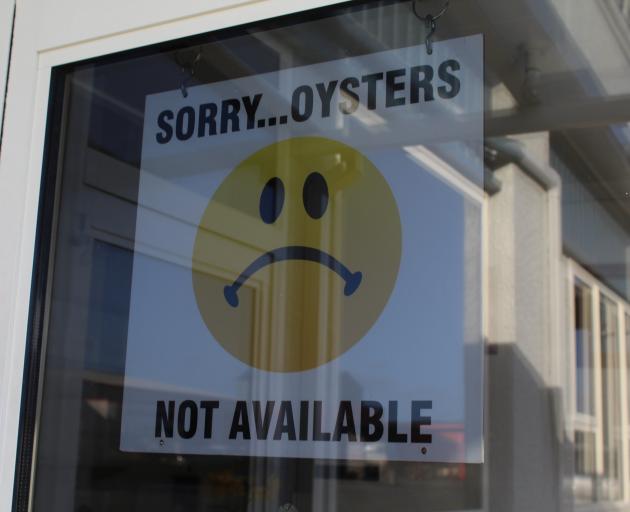 It might have been a good season but bad weather this week meant oyster boats were unable to go fishing, so there were no oysters available at Barnes Wild Bluff Oysters in Invercargill yesterday. PHOTO: LAURA SMITH
A good breeding season and low numbers of parasites being detected are positive signs for Foveaux Strait oysters, those in the industry say.

The oyster season, which opened on March 1, ends tomorrow.

Oysters take six to eight years in the wild before they are grown enough to become "commercially viable".

The combination of two strains of the oyster parasite Bonamia, as well as environmental influences affecting recruitment, had effects on wild oyster numbers.

The parasite had decimated oyster populations in the past. Mr Wright said a surge of the parasite in 2002-03 led to a 90% mortality rate.

In 2017 a strain of the parasite was found on flat oyster farms in Stewart Island.

MPI monitors the farms as well as wild oyster populations. The last survey was conducted in March, and the next surveillance round will be next month.

"Oysters are collected and tested for the presence or absence of Bonamia ostrae," the spokesman said.

The company total catch quota was adjusted mid-season, Mr Wright said, as it had been set at a "conservative" 7.5million oysters - this increased to 10million - while the total industry quota was 15million.

With only two days left in the season, he said they were hoping for fair weather, as they had not quite reached the quota.

Oyster boat skipper Peter Leask finished early in the season with his crew of five, having gone oystering nearly every day in March.

Although they did not catch as much as they typically would, he said reaching the quota quickly was attributed to having worked hard early on - "we landed on a good spot, with good sized oysters, and bam, we were done".

When the quota increased to 10million, boats dredged for oysters in areas they had not worked in for more than five years, to avoid over-fishing in their regular locations, he said.