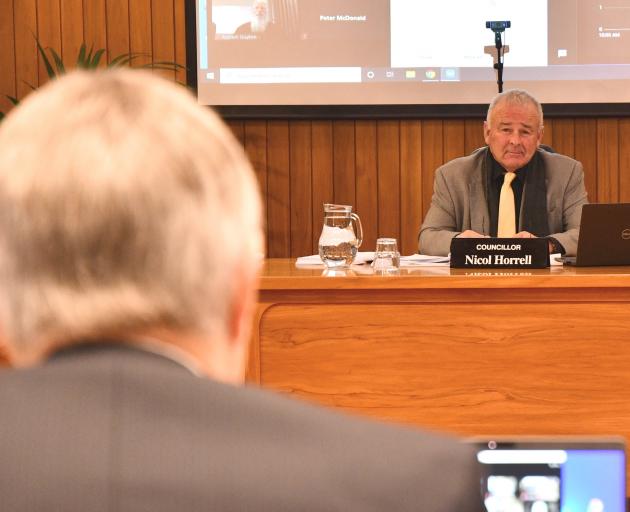 Western Southland farmer Doug Fraser spoke to Environment Southland councillors, including chairman Nicol Horrell, on Wednesday. PHOTO: LAURA SMITH
Southland residents, both city and rural dwellers, feel they will be hit harder than the other by likely rates rises.

Environment Southland staff, however, believe as the majority of the 50 submissions on the council’s draft long-term plan did not respond directly to what their preferred rates option was, there was no strong or emphatic direction from the community for any option.

The regional council yesterday held a hearing about the plan, at which 16 people spoke to councillors on their submissions.

The regional council’s preferred rates change option was a 20% increase, to be followed up by a 5% increase in the next three years and a 4% increase after that.

The second option was for a 16% average increase with the same subsequent increases as option one.

"You guys have got it wrong,’’ Mr Fraser told the council.

Specifically, he felt land-value based rates fell inequitably on the farming sector.

"That increase is higher than the majority urban ratepayers are paying in their total rates.’’

He acknowledged people were worried about the percentage increase, but said if that was on a small amount, it was insignificant.

He suggested, as was the the case for him, people making submissions did not address the rates options as they did not believe either one was right.

On the other hand, Mrs Hadley told the council that while the city council did not take a stance on either option, it asked the regional council to reconsider whether it had the proportion of rates right; the Invercargill ratepayer would pay 30% more whereas it would be a 12%-14% increase for sheep and dairy farmers.

"We’re just advocating on behalf of the ratepayer."

She also asked for them to give an explanation to ratepayers as to why there was an increase in costs associated with resource consents.

Councillors will reconvene for reconsiderations next week.