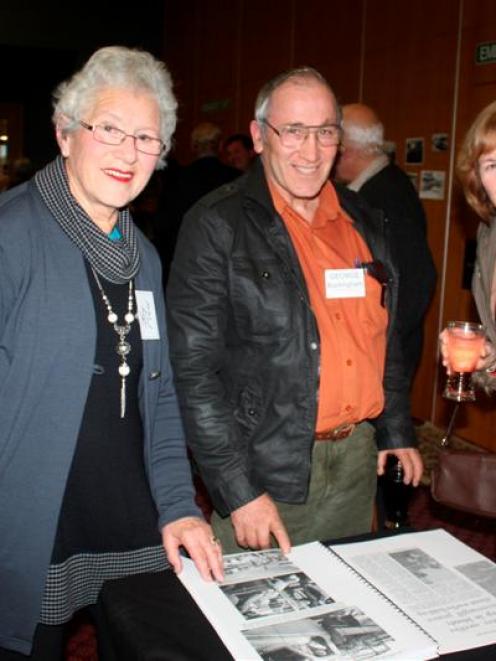 Former Waikawa Valley farmer Joy Nicol (left) and her then neighbours George and Janette Buckingham look at news coverage of the 1978 ''Bloody Friday'' protest and meat industry troubles during the reunion held in Invercargill on Saturday to mark the 35th anniversary of the protest. Photo by Allison Rudd.
It was a protest born on a Tuesday evening, organised in two days and carried out the following Friday afternoon.

But the memories of the 1978 ''Bloody Friday'' protest - when about 300 angry Southland farmers drove more than 1200 starving ewes through the main street of Invercargill before slaughtering them in a side street - are still fresh 35 years on.

About 180 people, half of whom were involved in the protest, attended a reunion in Invercargill on Saturday to meet old friends, swap stories, and relive a day which, while it had its critics, got them the results they wanted.

With stock starving because of drought, farmers were frustrated over industrial action by meat workers which was preventing them from having animals killed at local freezing works.

Blackmount farmer Syd Slee came up with the idea of the protest, enlisting the help of his cousin, Owen Buckingham, from Te Anau. Another cousin, George Buckingham, from Waikawa Valley, near Curio Bay, was on the organising committee, his wife Janette said on Saturday.

''If you can call a meeting in King's Fish Shop [Invercargill] two days before the protest being on the organising committee,'' Mr Buckingham said. His neighbours Joy and Ian Nicol were among farmers who said they would support the protest.

Everyone was told to choose a few emaciated sheep and drive them by car and trailer to Lorneville, on the outskirts of Invercargill, Mrs Nicol said.

''Waikawa Valley is about 50 miles [80km] from Invercargill, and before we got to Lorneville we never saw another car and trailer. We wondered what sort of a protest it was going to be. Then we came round the corner and here were all these farmers with trailer-loads of sheep.''

The convoy made its way to the Tay St/Dee St corner where the sheep were let out and walked through the centre of the city to a section near the Invercargill borstal. The sheep could not run, Mrs Nicol said.

''They were in a bad way. We couldn't get them killed at the works. They would tell us to send them on a certain day and we would, but the meat workers would go on strike and the sheep would come back again.''

Asked why she wanted to attend the reunion, Mrs Nicol said it was to remember a significant day in Southland history when farmers banded together and achieved something.

''I also wanted to come for my late husband. He would have been here boots and all.''

Former Oreti farmer Russell Miller was chairman of Federated Farmers' Southland meat and wool section in 1978. He took sheep to the protest but took them home again.

''I had to race off to [the suburb of] Windsor, where someone had put a dead sheep. I think it was done by the meatworkers to embarrass us. I had to retrieve it. I couldn't let the public think the farmers had done something like that.''

The protest was ''very dramatic'' but had to be to draw attention to the plight of farmers and their stock, Mr Slee said.

''They were really tough times and farmers had to do something. Industrial action was a man-made problem. We can handle floods and droughts but we couldn't control that.''

The works killed stock more consistently after the protest, but the day had ramifications for Mr Slee, Mr Buckingham and some of their relatives. Mr Slee's sister, Dr June Slee, of Kurow, said the family's stock was backlisted by the meatworkers' union for six months, until Mr Slee went to court and won a decision.

Dr Slee wrote a book about the protest in 1979. A new edition, called Bloody Friday Revisited: Recollections of the 1978 Southland Farmers' Protest, was launched on Saturday. It includes memories of the day and its aftermath gathered from farmers who took part and those who witnessed it.