A new attraction for Invercargill is being constructed using a building technique not seen in the city before.

Tuatara Structures managing director Jordan Frizzell said the team had been excited to see the roof lift happen, as they were aware of how eager the community was about gaining the amenity.

The 1500m2 hot dip galvanised structural steel-framed roof was constructed at ground level and then lifted into place using five cranes, allowing pre-fixed structural legs to swing into position and be connected to their engineered foundations.

Mr Frizzell said the 8m tall building was the first structural steel building constructed in this way in Invercargill. 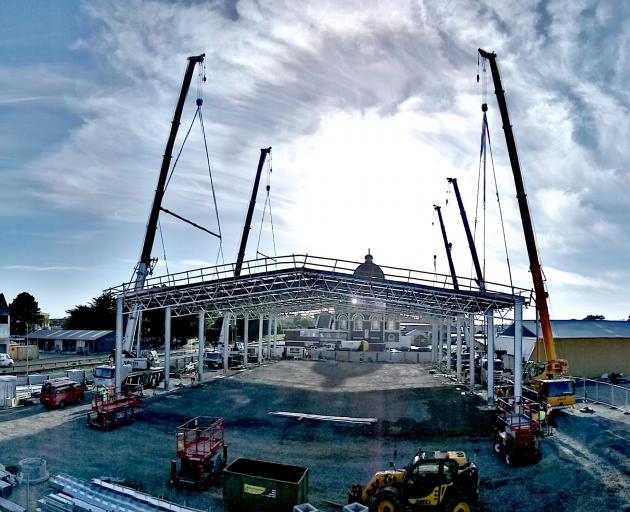 Tuatara Structures erects the roof of Invercargill's new trampoline park on the corner of Nith and Tyne Sts on Saturday. Photo: Supplied

The construction method was not only safer, as little work happened at height, but also faster than the traditional building method, he said.

''While there are other companies across New Zealand who do partial building lifts, we are the only one constructing large scale commercial, rural and industrial building in this way, every time we build,'' Mr Frizzell said.

The development is being built on the corner of Nith and Tyne Sts, a site owned by HWR Property. The completed building will be leased to former owners of RJ Models and Toys, John and Robyn Smart, for use as an indoor trampoline park.

Initially the build had been expected to be completed by early November.

HWR Property project manager Sue Hill said the build had been delayed by the resource and building consent process, but the development was now expected to be completed by early December.