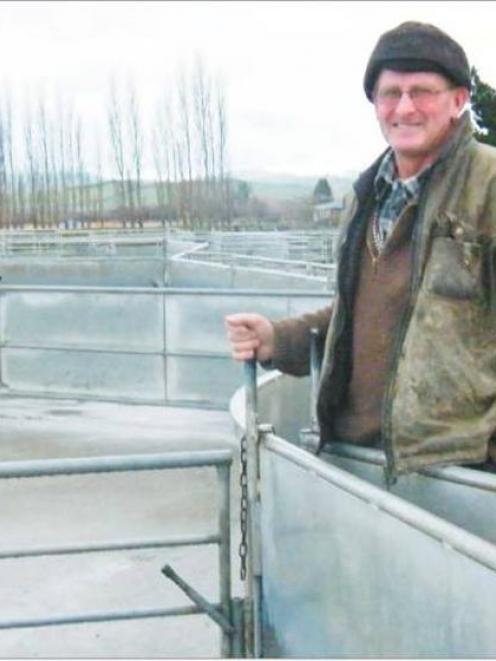 Central Saleyards chairman Peter Grant, at the company’s Charlton Saleyards, hopes to negotiate a trade-waste agreement with GDC that will result in a long-lasting waste disposal method being implemented.
A costly, ongoing upgrade of the wastewater system at the Central Saleyards Charlton site may be avoided if the organisation can secure a trade-waste agreement with Gore District Council.

Central Saleyards chairman Peter Grant said if the saleyards closed and all sales were held in Invercargill, it would result in considerable financial losses for Gore businesses, so retaining the yards was vital.

The saleyards' resource consents issued by Environment Southland for wastewater discharge to an existing pond expired on May 21, a report compiled by consultants Opus International environmental engineer Stephen Glenny stated.

‘‘Obtaining resource consents for discharge of effluent has become increasingly difficult as regional councils have become progressively more stringent and this is expected to continue in the future,'' Mr Glenny said in the report.

If Central Saleyards renewed its holding-pond system at the Charlton site it was likely to cost well in excess of $100,000 and the consent would only run for a finite time, Charlton saleyards secretary Ray Ashley said.

Once the resource consents ran out, the requirements for renewing those consents often changed markedly and that might require considerable, ongoing financial input, Mr Ashley said.

‘‘This scheme here [with SFF] would provide a perfect solution,'' Mr Ashley said.

The public had been extremely supportive of the proposal, he said.

The cost of hooking into SFF's existing system was likely to be about $114,000 with operational costs, including pumping and trade waste and maintenance charges of about $2500 a year.

The volume of wastewater generated by the saleyards was about 60m3 a week.

The effluent loads of Central Saleyards in comparison to the SFF Waitane processing plant were quite small, being only 1 per cent of the volume discharged, the report stated.

Central Saleyards has about 200 shareholders and the company was considering a share issue in order to cover costs associated with the upgrade, Mr Grant said.

Mr Grant described SFF as being ‘‘very obliging'' and keen to accommodate the saleyards, and the council had also been extremely supportive.

SFF communications manager Brent Melville said there was a lot to work through in terms of the proposal, but the organisation was ‘‘pleased to be able to be of assistance'' and he was ‘‘quite optimistic it would all go ahead''.

Central Saleyards holds weekly sales on Thursdays and some special sales during the year including calf sales.

The organisation had also managed to secure a weekly dairy sale, which had alternated between Lornville and the Charlton site in the past, Mr Grant said.

‘‘So that's been quite positive,'' Mr Grant said.

The spin-offs for the community were considerable because the sales brought people into Gore and that meant they inevitably spent money at businesses such as supermarkets and garages, he said.

Gore District Council general manager of district assets Paul Withers said the discussions held on Friday centred around the need to pre-treat the wastewater, monitoring quality and measuring nutrient content in the discharge before it went into SFF's system.

The technical aspects of putting together a trade-waste agreement were being worked through, Mr Withers said.

The proposed trade-waste agreement would most likely be peer reviewed before it went before the council's operations committee and then if it gained that committee's endorsement it would go before the full council for consideration, Mr Withers said.

The benefit to the community of keeping the saleyards operational was important, Mr Withers said.