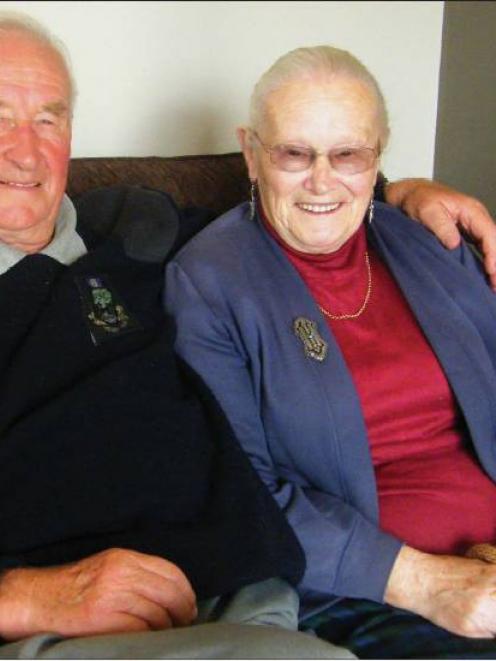 
James and Jeanie (nee Macdonald) were married in 1948 in Linlithgow, Scotland, and emigrated to New Zealand in 1958.

‘‘We met at school, Linlithgow Academy, but in a class of 23 girls and 22 boys, James was just another one of the boys,'' Mrs Oliver said.

After leaving school, Mrs Oliver worked as a table maid at a grand house where Mr Oliver's brother was working.

‘‘When James came to work at the same house, the spark was there, and we began seeing each other when I was 16. I've never really had any other boyfriends,'' Mrs Oliver said.

‘‘Our wedding was in the Linlithgow registry office, followed by a cup of tea at James' mother's house and then we went to the pictures to see Bambi - times were tough back then,'' Mrs Oliver said.

‘‘We were still on war rations until the '50s. There was not much to go around,'' she said.

After 10 years' working on a farm and raising a growing family of four sons, the couple were persuaded to emigrate to New Zealand by a friend who had recently done so.

‘‘There we were standing at the gangplank of the Captain Cook heading for a new life - four boys aged nine, eight, seven and two and a bit, plus James with his banjo, and me.

‘‘It was a five-week trip, but the weather was beautiful and the sea like glass all the way,'' Mrs Oliver said.

They moved around over the years, but never strayed from Southland.

Mr Oliver worked as a farm worker in the Gore district for six years before taking up employment at the Mataura freezing works for 24 years until his retirement in 1988.

In between raising her four sons and having another two boys, Mrs Oliver did a variety of jobs before also settling at the Mataura freezing works.

‘‘I dinnae' mind the freezing works, but I couldn't abide working in the Cremoata mill [where she worked for two weeks]''.

‘‘I started on the Monday, quit on the Friday and worked out my week's notice.

‘‘It wasn't for me, despite the fact I loved porridge,'' she said.

The couple retired to Gore but recently moved to Riversdale into a purpose-built unit on their son Rob and daughter-in-law Christine's farm.

After their retirement, the couple took the opportunity to see the rest of the world in a five-month trip that included crossing Canada by train and the United States by bus, before returning to Scotland to visit relatives in their old home towns of Blackness and Linlithgow.

They also did a campervan tour of New Zealand.

Mr Oliver still plays golf at the Gore Golf Club on a regular basis, playing off a 20 handicap, and for many years was involved in amateur boxing in the Gore district.

‘‘I trained Russell Newton to a New Zealand championship and I still help him down at the gym,'' Mr Oliver said.

Mrs Oliver was involved in linedancing at the Gore RSA until she fell five years ago and subsequently needed a pin inserted in her leg.

Both agreed on the reasons for their happiness as a couple.

‘‘We've both got a good sense of humour - and you need it,'' Mrs Oliver said.

‘‘Always treat people as you want to be treated yourself. That's the way to a happy life,'' she said.

They will celebrate their diamond wedding anniversary with a small gathering of family and friends on the farm at Riversdale on Saturday.