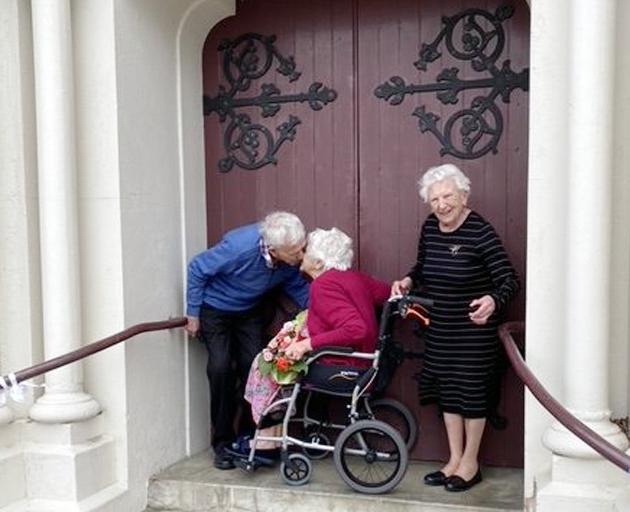 Mr and Mrs Allison pose in front of the church, 70 years after they were married there. They are accompanied by their bridesmaid, Beatrice Croft.
An Invercargill couple celebrating their 70th wedding anniversary believe they were lucky to find each other.

Reaching a platinum anniversary would be a challenge for many couples, but for Lenox and Betty Allison it seemed to have been an easy task as they said had not noticed the time passing.

"Honestly, it did not seem that long. It doesn’t take long to that," Mrs Allison (nee Mutch) said.

Friendship, love, support and respect were among the values the couple said were key to a happy marriage.

They met  in 1950 at a mutual friend’s house and  could not take their eyes off each other.

"It was love at the first sight. It really was," Mrs Allison said.

He did not take long to propose to her.  Eighteen months later they married at St Paul’s Presbyterian Church in Invercargill on December 5, 1951.

They had three children, a business and worked together on a farm for decades.

The couple shared many passions including travelling and gardening, she said.

Mrs Allison fondly remembered the three years they lived in England, from where they travelled all over Europe.

Friends made there had come to New Zealand on the couple’s 60th anniversary.

"They surprised us with the visit — it was so good to see them again," she said emotionally. 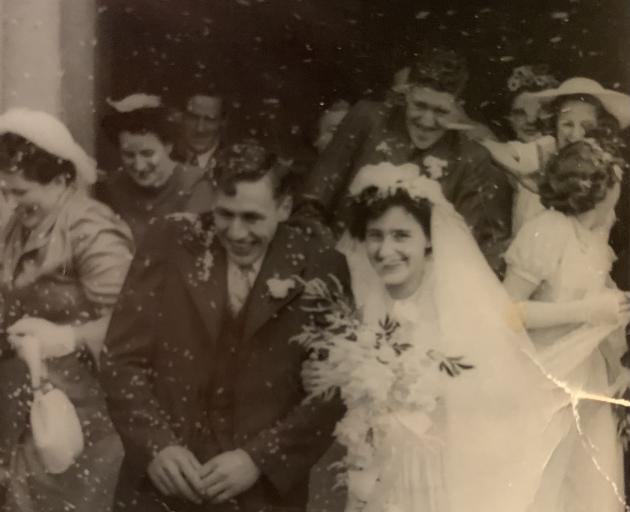 They were members of the New Zealand Motor Caravan Association and had driven the whole country from south to north "about three times" with a caravan built by Mr Allison.

They also shipped their beloved Chrysler car to accompany them during their adventures in Australia for three months.

"We travelled a lot. I can say I’ve been very spoiled by him," Mrs Allison said with a big grin.

"There is no wonder we made it to 70 years; we were always finding something to do."

Last weekend, the couple’s family from across the island returned to Invercargill to celebrate their anniversary.

The couple were thrilled to get a visit from their bridesmaid, Beatrice Croft, during the celebration.

"She had her 90th birthday about four months ago but we could not see her due to the [Covid-19] restrictions — I’m so happy to have seen her, so happy," Mrs Allison said.

Mrs Allison is 90 while her husband is a year older.

The couple live in the Enliven Vickery Court rest-home.

When asked how she felt celebrating their platinum anniversary, Mrs Allison said "I don’t think it has anything amazing about it.

"It made it easy and I feel very lucky."