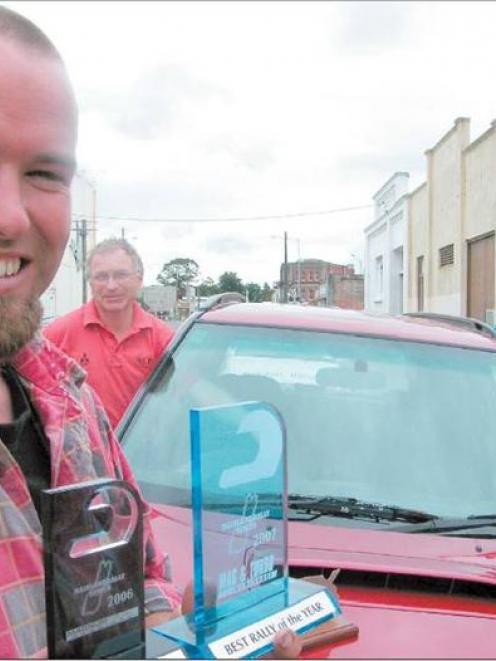 Judged as the best rally of all five in the series, it is the third consecutive year the Gore Rally has won the award.

Highlights for the Eastern Southland Car Club included Gore driver Kevin Laird winning the Club Championship for the fifth consecutive year.
The club received good numbers of entries at all of the 2008 rallies, especially the Gore Rally in August, Mr Laird said.

‘‘The Kaitangata gravel hill climb, last October, was huge with over 60 entries,'' he said.

More women were also entering events, with more than six or seven at some of the Autocross events, and younger drivers - 12 and older - were still showing interest in motor sports, Mr Laird said.

The Gore Rally was resurrected in 2006, when it first won Rally of the Year, as part of the 50th anniversary celebrations of the Eastern Southland Car Club, Mr Laird said.

In 2007, the rally was staged in the Catlins, where it had been staged for several years before the Gore Rally was resurrected, and went on to win Rally of the Year for the second time in a row.

In 2008, the club staged the rally in Gore again, and then won the third award.

‘‘We are thrilled to get the award for the third time in a row. It is a huge team effort and we have to say a huge thank you to our sponsors, volunteers, the competitors and the people of the district and all those who make the rally happen,'' Mr Laird said.


The Eastern Southland Car Club was still well served with an increasing membership. ‘‘The club is as strong as it has ever been,'' Mr Laird said.

The 2008 Gore Rally was won by Christchurch driver Deane Buist in a Mitsubishi EVO 4.

Buist then went on to win the Mainland title for his third time, and on each occasion he has won the title he has also won the Eastern Southland Car Club's Rally in Wyndham, the Catlins and Gore.

Upcoming events of the Eastern Southland Car Club include a threeday event on January 31 at Teretonga, Autocross on February 14 and possibly March 1, and the Bluff Sealed Hill Climb on March 7.